What does it mean to "owe someone a quarter"?

I was watching an episode of the TV series Once upon a time, and Regina says "I owe someone a quarter."

Anyone know what this means?

Short Answer: Regina is referring to an earlier agreement (or friendly wager) that she made with her friend Snow. The agreement was that Regina would need to pay (or: owe) Snow a quarter if Regina found hope for her situation. A quarter is a coin worth 25 cents, or 1/4 of a dollar (See definition 3). Since Regina found hope, she says that she owes someone a quarter. This someone is Snow. Note that one can watch the scene "I owe someone a quarter" here on YouTube. The line is uttered just after the 2:07 mark.

Long Answer:
A quarter is short for a quarter dollar coin. A U.S. quarter is equal to one fourth (1/4) of a U.S. dollar. So it takes four quarters to equal a dollar. (Canada, our neighbour to the north, has its own quarter, which is worth one fourth of a Canadian dollar.)

Since Regina lives and works, or does whatever she does, in the U.S. (the show is set in the U.S. state of Maine), she is most naturally referring to a U.S. quarter.

Here is an image of a U.S. Quarter, showing the front and back. Not all U.S. quarters have "Texas" on the back, just the best ones. Since a dollar has a value of 100 cents, a quarter has a value of 25 cents. We use the cent sign ¢ to mean cent or cents. In most U.S. states, a quarter (25¢) right now will buy you almost 2 pencils. 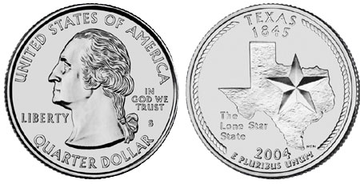 Next, if you owe someone money, this means you need to pay them money for some reason. Either for a product or a service that you have not paid for yet. Or perhaps you borrowed a quarter from someone and didn't pay them back—although anyone over sixteen years old will probably not care if you pay them back. After all, what is two pencils, more or less?. There is another option, which the rest of this answer explores. 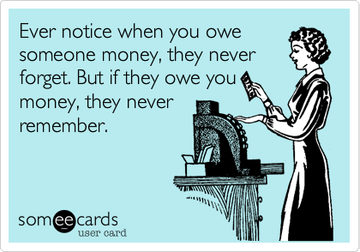 From the context of the scene, shown on YouTube, any native speaker can guess the general if not the specific meaning.

The general meaning is that Regina must have had a standing agreement with someone to pay them a quarter if something happens. This is more of an agreement rather than a bet, because of the nominal sum (Definition 2b) being wagered. As an aside, let me throw in that the old phrase (American English) "two bits" usually refers to exactly 25 cents, although it can mean a similar small sum.

We don't know the exact bet/agreement unless we are familiar with it from a former episode, or from an earlier part of the same episode.

Apparently, in this case the bet took place earlier in the same episode - which, by the way, is actually a double episode called "Smash the mirror." One can read a long plot "summary" on Wikipedia yet come away with no mention of the quarter or the fact that Regina and Robin Hood kiss in the public library, which makes me think that this summary needs to be rewritten.

Nevertheless, thank heavens, on another website, a fan named hedwig, gushes about what she loved about the episode, and this includes:

...Snow telling Regina not to feel guilty about sleeping with Robin, Snow giving Regina a pep talk about hope, and Regina's comment about owing Snow a quarter if she was right, and then saying to Robin that she owed someone a quarter...

Thus, in this same double episode Regina comments to Snow that she will give her a quarter if Snow's pep talk about hope proves true. And since it does prove true, she says (more to herself than to Robin) "I owe someone a quarter."

"Owe" from MW - to need to pay or repay money to a person, bank, business, etc.

"Quarter" - there are several definitions but the most likely is probably #5 here - a coin worth a quarter of a dollar.

So it's literal, not an idiom. She probably borrowed a quarter from someone and promised to repay it later. She hasn't yet repaid it, so she owes it to them.

It is customary among professionals to avoid arguing over disagreements by betting a quarter (i.e. 25 cents, a small sum). When the issue is resolved, the loser graciously pays and the disagreement is over. To see two such bets between two of the greatest engineers ever, go to: http://www.nationalaviation.org/rich-benjamin/ (search for the word "quarter")