How does one use a rostrum?

...or is there a word or expression more common than 'rostrum'?

When you want to give a speech, and there's this in the room: 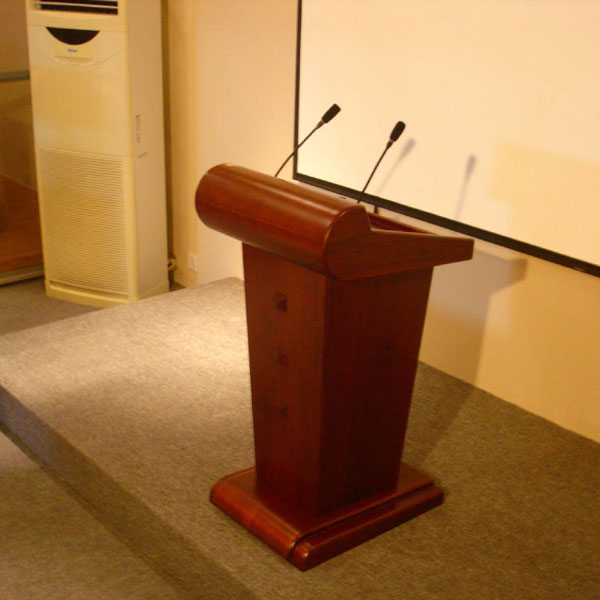 Ngram was quite unhelpful, showing only trace amounts of any of the variants.

Dictionary.com says that a rostrum is the platform and not the strange item of furniture, so you would stand 'on' the rostrum. The strange item of furniture is a lectern. You certainly don't stand 'on' it. According to Ngrams, standing 'at' or 'behind' a/the lectern are both possible. If there is a difference, standing 'at' a lectern gives you a little bit of freedom of movement - you could briefly stand to the side of it while still being 'at' it.

You may call it a podium, soapbox, dais, etc.

However, when you want to use it for your speech, I'd go for the preposition 'on' ignoring my physical position. I mean that's what you are asking -if we are giving speech using that thing, where are you?

You asked -how does one use a podium (mainly for giving a speech)? ~ By getting 'on' it.

The term "podium" is used correctly to refer to the horizontal surface upon which a speaker, conductor, or other such person stands; while such surfaces are often higher than the immediately-surrounding floor, the term "podium" may refer to such an area whether it is raised or not (one may think of the area as having "elevated importance").

In cases where the standing surface area behind the lectern is physically higher than the surrounding floor, the term "rostrum" would be appropriate, but it is not appropriate when there is no raised floor. The term may be somewhat less subject to misinterpretation than "podium", since it refers to the platform, but that doesn't mean it always refers to the horizontal surface. Some kinds of movable rostrum have a permanently or semi-permanently attached lectern, railing, or other such pieces that extend above the floor surface; a request to place something on the rostrum could be interpreted as either an instruction to spread the item on the floor, place it on the lectern, or hang it from the railing, depending upon the nature of the item in question.

Not the answer you're looking for? Browse other questions tagged prepositions word-in-context or ask your own question.

7
Why are both “when” and “once” used in “… when it was once broken”?
3
“there's no risk in X” vs “there's no risk of X” vs “there's no risk to X”?
1
What's the difference between “react on” and “react to”
3
Which preposition to use with injury nouns?
0
How could I find out the meanings of “name a child for her” or “name a child after her?”
0
How to use in points or score in context of exam result?
1
kind to vs gentle with
0
To behind, to under
1
Use of “past-dweller”
0
“Shoulder” or “shoulders”… which one should I use?