The car crashed into a bend -- meaning?

Example with a context:

The car accelerated and crashed into a bend, avoiding the missile and leaving the passengers unharmed, he added.

Dictionaries define A bend as a curved or angled part of something, but I'm not sure how you can crash into a bend.

How do you guys understand this description? There's a bend in the road and you crash your car into it?

To crash into a bend is an expression used in British English and Australian English (as well as in current Englishes derived from BrE, such as in Hong Kong, Thailand, Bhutan). It is not used in American English. Also note, when talking about driving in general, bend is characteristically British English (eg, driving through a bend), whereas curve (or turn) is used in American English. 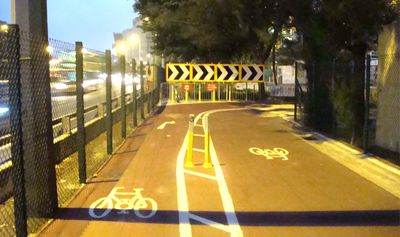 From the above photo, from a Hong Kong government site showing an

For instance, an article about a fatal accident in a neighborhood in Australia all but equates smashing into the bend with crashing into a tree at the site of the bend:

Police are piecing together how a 56-year-old driver from Maryborough failed to negotiate a bend heading towards Buderim village and crashed into a tree... A neighbour known as "Jill" said it was not the first time she had witnessed a car smashing into the bend heading uphill along Lindsay Rd.

In 30 years she has lived in her home, Jill has had a car burst into her front yard and saw a motorcycle crash into the bend.

The photograph accompanying the article does not show a guard rail.

Whether or not the phrase can be used when there is no "physical feature" other than the bend (ie, AmE curve) itself is not known to me. But many dangerous bends have a guard rail into which one can crash.

The preposition into (definition 2):

Expressing movement or action with the result that someone or something makes physical contact with something else:

'he crashed into a parked car' 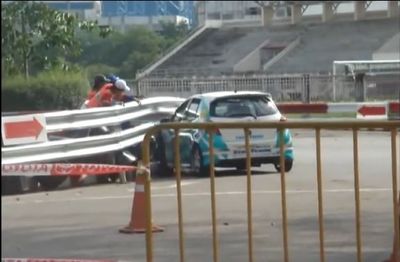 This race car has crashed into a bend. (This is the opening frame of a video posted on youtube.) The accompanying text, describing an event filmed live in Thailand, starts:

Just some extracts from Toyota Motorsport event at Sapan Hin, Phuket, on Sunday 9 October, just seconds after a racing car crashed into a bend, but driver got out OK and went off in ambulance...

Results for "crash(ed) into a/the bend" are meager/meagre on search engines. Yet, several of them are in a context of a bend that includes or implies a guard rail or other obstruction one can crash into.

No 1 At the gran prix

So once you have started the race, you will notice that it can be quite a challenge to master the controls...If you crash into a bend or run over the curbs, it will cause damage to your vehicle...

See the accompanying youtube video of the dated game, showing bends into which a race car can crash.

on the way down to the super steep “double black” – dropping in, my arms are killing – probably 15 minutes into the race now – so struggling to exert enough force to brake, and with bodies strewn left, bodies strewn right, I am sent slightly off line and crash into a bend. Hot damn – people pass me.

It's possible that in the above description of a mountain bike course that there is no guard rail to crash into. The same can be said for the following usage:

from shipai 石牌 , it was a fingers-and-hands-numbing-brake-holding 20km downhill to lunch point 坪林. we had to constantly remind ourselves that if we got distracted for even 1 second, we’d crash into the bend or worse, string our cycling mates along.

...Then car number 23 rolled over and had an accident and another crashed into a bend.

The rally (race) is in Bhutan, whose English is traditionally British English. There are many photos that accompany the article thread.

When I was driving home a week ago- car in front of me doing about 40mph and crashed into a bend. Driver was injured and I had to dial 999 for her,...

(999 is the emergency phone number used in the UK and elsewhere, but not in the USA).

It wasn't too bad on the dual carriageway but once off it I couldn't actually drive without my full beams being on for fear I'd actually crash into a bend.

No 8 Signs of the Times* (Ireland)

...A growing issue in County Cork is missing road signs which leave dangerous areas unmarked for visitors passing through...or worse, some one could crash into a bend because there are no signs to warn you its there.

No 9 most crashed into a bend on (Thailand)

Meng Xiang started out with his defense ,hard block Buddha palm ,although early after the jump dismantled the strength ,but still feel his arms like is one hundred thousand jins giant impact ,hot stabbing pain my heart ,body is bumped to fly almost 50 meters ,a knocked down several hapless passers-by ,most crashed into a bend on the corner ,before it stopped .

This is a blog entry from a website in Thailand (where traditionally Britsh English is taught). Its usage of a space before a comma (,) or period (.) is not in accord with standard UK and US usage.

It is a slightly odd usage - I'm not really comfortable with it myself, but I wouldn't call anyone else out for using it.

Essentially, you crash = hurtle at speed into a bend1, causing you to crash = collide into2 [something at] the bend. In most cases, what you actually hit is the bank or trees on the outer side of the bend, because you can't turn sharply at speed.

So the usage is internally "contradictory", with bend having two completely different senses (an abstract quality of a trajectory, and a concrete noun you can hit). I expect that's why it rarely occurs - I managed to find this written example, but that's about it.

1 cf accelerate into a bend - not a good thing to do, because you're likely to end up...
2 cf crashing into a tree

A bend is sometimes used generally to mean an area containing or marked by a bend (twist, curve, turn) in something, commonly for example, in a river or a road.

If it is used to describe a bounded area, such as a stretch of road that is marked by the presence of a curve, then for something to happen "in the curve" makes sense as a way of specifying a location.

The word might also be loosely used to describe a feature associated with a curve in a road, such as a bank, wall, trees, a mountainside that forms the shape of a curve along which a road adheres. In such cases the use of "into" makes sense as using "The ball crashed into a wall."

We might encounter language such as "A cabin built on (or upon or at) a bend in the river three miles north of here."

To crash or wreck at, in, or into a bend would simply mean in an area characterized by a bend. There's nothing wrong with it, though I'd expect to hear it phrased exactly like this in speech more often than in writing because it is not a very careful or specific description.

A similar use in a road safety report:

Many run-off-road crashes can be prevented by adjusting the road design. SWOV found that when the driver ran off the road in a bend, that bend often had a tight curve radius.

WordWeb dictionary has something 'close' to what it means here

The example follows that of a road which might fit here

"a bend in the road"

In this context, acceleration and crashing is very likely to be on the 'bend'.

ANSWER RETRACTED AS SPECIFIC TO AMERICAN-ENGLISH.

The parsimonious answer is that although the author's statement can be understood, it is not an idiomatic use of the word "bend" with "crash into".

FWIW, I find zero hits on ngram for crash/crashed into a/the bend.

Not the answer you're looking for? Browse other questions tagged meaning meaning-in-context phrase-meaning british-english comprehension .

207
How does the "Dalai Lama walks into a pizza shop..." joke work?
3
The meaning of the word "engage" in context
3
What is bend migration?
1
Using the verb 'cover' to mean pay for
1
nothing that I can do will help you -- is everything alright with the grammar and semantics here?
0
Phrase meaning "crashed in thunderous white"
0
Meaning of "took the bend"
1
Meaning of "tapped into"