The meaning of cut in the sentence

The following quote is from Godfather book

As the weeks went by and he became busier and busier with getting the script ready, casting the movie and working out production details, Johnny Fontane forgot about his voice, his not being able to sing. Yet when the academy award nominations came out and he found himself one of the candidates, he was depressed because he was not asked to sing one of the songs nominated for the Oscar at the ceremony that would be televised nationally. But he shrugged it offand kept working. He had no hope of winning the Academy Award now that his Godfather was no longer able to put pressure on, but getting the nomination had some value.

The record he and Nino had cut, the one of Italian songs, was selling much better that anything he had cut lately, but he knew that it was Nino's success more than his.

I'm a little confused by the last sentence I provided, particualrly by the meaining of cut in here. What is that?

The thing is that I'm used to use that word with vegatables. Like cut vegatables or something similar.

cut (verb) MUSIC if a musician or band cuts a record, they record it

In the realm of music, cut can be used as a noun as well:

cut (noun) MUSICa piece of music that has been recorded

Given the time period when The Godfather was written, the "record" probably refers to a vinyl record that would be played on a turntable: 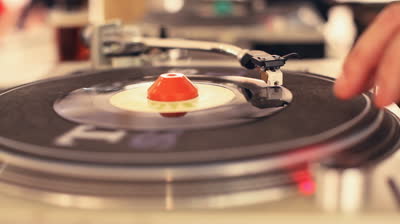 "Cut" can have many meanings. From context, it appears one of them is "cut a record," meaning "make a record" (like, of music). I'd guess the etymology of this is that a vinyl record has grooves cut into it; before tape became more common, you literally "cut" the sound into the record.

0
cut-out-and-keep -- meaning?
0
Does the word " Humble " mean "at least" here?
6
What is the difference between "get my hair cut" or "have my hair cut"
2
less than clean cut matter
1
What's the meaning of "How'd you manage that"?
5
What does "House Cut" mean?
1
what's the difference: cut vs cut through
0
Is "up" in phrase "cut up" required or optional? If "up" is required, what is the difference between "cut up" and "cut"?
3
What does "If I had anything to do with it" mean here?