How to say 'give your seat/place to somebody' on transport?

How would you call that if I'm on public transport, sitting comfortably on a chair, and then a senior or a lady in red walks in and so I want to stand up and give my place to that person ?

like, I ... my place/chair (to) that person. I'm not sure, but there should be something like that.

Thanks for your help, guys :)

The other answers I see here describe how to tell the person that you would like to let them have your seat, but that doesn't appear to me to be what the question asked.

To answer your question by finishing your example sentence, I would say:

I gave up my seat to an elderly lady.

An alternative form would be:

I let an elderly lady have my seat.

This could imply that she asked for it, and you then let her have it, as opposed to the first phrasing which implies that you did it without prompting.

That being said, one of the comments on this page indicates that a listener may interpret those two phrasings with the reversed meaning, with the second phrasing voluntary and the first forced.

Either way, the two phrasings are essentially identical. Use whichever you prefer.

As far as offering your seat, I normally wouldn't even say anything. I would just stand and move aside when someone who clearly needs the seat more gets on. This is partially because most buses I've been on have signage saying to give up your seats for the elderly or handicapped. 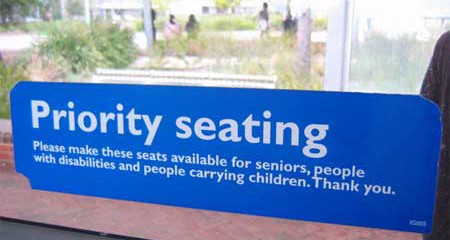 You smile and stand and ask, "Would you like to sit down?"

"Chair" doesn't work here. It refers to a single, free-standingpiece of furniture, not to shared seating such as we find on the subway or bus.

In your context, I would say:

I wouldn't use chair as that usually refers to a standalone unit for one person only to sit, and wouldn't expect that on mass transit.

Place might be OK, but would be better in a situation like where you are waiting in line to go into a movie:

Not the answer you're looking for? Browse other questions tagged usage or ask your own question.

1
Push one's way in
5
How to ask somebody to help you get up on a wall?
7
What should I call a person sharing knowledge in school that is not a teacher?
1
Have/ get me considered?
1
Using 'should' and 'would' in this sentence
3
Grammar usage of 'both'?
1
What does 'make it into' mean?
0
Defining and non-defining relative clauses
0
Is it correct to say "Try your advice"?