[Farell uncuffs Cage's hands and turns to the squad]

Sgt Farell: Private Cage is a deserter, I'm making you all personally responsible for his deliverance. He will be combat ready at 06:00 tomorrow.

Sgt Farell: Private Cage is under the delusion that he does not belong here, we must dissuade him of this delusion. If he tries to run, feel free dissuade him until he can't piss standing up.

Cage: You have to listen to me, I will never be combat ready!

Sgt Farell: I envy you, Cage. Tomorrow morning you will be baptized, born again.

[Farell turns and starts to walk off] 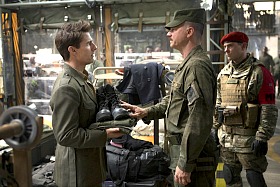 This conversation is taken from the movie Edge of Tomorrow.

As I recall, lots of performative verbs like advise, permit, promise, warn, etc. are used with present simple rather than the present continuous to perform a speech act.

In this context, could Farell say "I make you all personally responsible for his deliverance" instead? Any nuances suggested?

I'm going to try another approach to answer your question. My answer is based on the explanation given in the book Meaning and the English Verb (2nd ed.) by Geoffrey N. Leech, which I remember you have.

In entry 11, Leech mentions that,

These PERFORMATIVE VERBS express formal act of declaration, in contrast to the Progressive forms We are accepting your offer, etc., which merely report the speaker's present activities or future intentions. This usage is also characteristic of more ceremonial contexts, such as

After the above excerpt, Leech also mentions a bit more about the difference between I write . . . and I am writing . . .,

Also, in formal letters the verb write is sometimes used as a performative: I write to inform you that . . . (But in a more informal style I am writing . . . is preferred.)

In your example, I'm making you all personally responsible for his deliverance, I believe that the verb make is an activity verb (a type of event verb, according to Leech, see 36c), and it's more appropriate to use the Progressive aspect. Using the Simple Present is possible, but it will make the utterance sound ceremonial, which may not fit the context (the occasion in the movie--I haven't seen the movie yet, by the way. :-) as well as the use of the Progressive aspect.

Now, why not "I make you all responsible?"

I believe it wouldn't be technically wrong, but would sound very, very odd. One of the reasons for that — except for the one I mention above — is that "I make" can imply a continuous effect or routine:

I make you tick, don't I? (this is the more important example)

Sgt Farell only has to make the soldiers responsible once.

Not the answer you're looking for? Browse other questions tagged tense present-continuous or ask your own question.

3
tense usage: “It has been (is) two weeks since I've seen (last saw) you”
2
Can you clear my this doubt of tense usage - “this happens” and “this happened”?
1
Do you feel like you're using conditional when using “would” for past tense ?
0
Present continuous “I'm giving you …” for a gift
0
I'm always taking photos (present progressive usage)
-2
Can you use “had” for the present tense?