What does “hardcore” mean in this picture?

I saw a picture on Reddit. What is the meaning of hardcore in it? 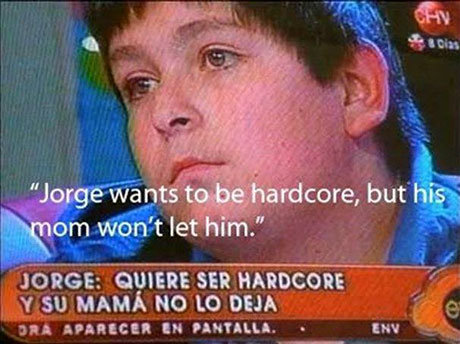 The noun 'hardcore' has many meanings but I think they should be two separate words like this - hard core if its used as a noun in this context.

Here is the video of the entire episode: https://www.youtube.com/watch?v=WdXSnsgqH4Y in which, his mother is complaining a lot about this kid. The kid wants to behave in his own way and thus, losing good grades at school.

Hard-core in this sense is 'doing things the way someone wants but without changing their behavior'. His mama agrees that she'll let this guy be hardcore but then, she wants good report card at the school.

To support a little, I quote OALD's entry here

hard core (n): singular + singular or plural verb] the small central group in an organization, or in a particular group of people, who are the most active or who will not change their beliefs or behaviour

[However, I may not prefer using this in such case].

It's rare that the best definition is from Urban Dictionary, but this is one of those few times. In this case it is slang for cool, rebellious, intense or bad-ass,

DJ McMayhem covered the basics, but since humor tends to be very regional and subjective, here's a further explanation.

It's being used as an adjective. (An article would be required for it to be used as a noun, and none is present. I'm positive it's not a bad translation; see below)

I found multiple reposts of the same picture on Reddit, imgur, and tumblr, all with humorous intent; the phrase was also used as a caption for unrelated images, and commented on unrelated threads. Clearly, a minority are trying to turn it into a meme.

Had the original caption meant hardcore in the literal or formal sense, the image never would have gained any popularity, as it wouldn't be funny. The Spanish caption also would have translated the word - leaving the word in English suggests that it is a loanword, only having a meaning in English.

The Urban Dictionary definition is correct: hardcore is meant as rebellious. The caption is funny in a "verbal irony" sort of way - the very nature of being rebellious suggests a disregard of authority, yet Jorge's desire to be hardcore is clearly impeded by the instructions of his mother, an authority figure. In short, his mother's wishes wouldn't be a concern for Jorge if he were actually hardcore.

It's hard to explain. I don't remember how to describe a (former) Chilean hardcore; the situation of the image happened too many years ago. The only thing I can say is that hardcore in that context is a certain manner of dress and hairstyle that imply being rebellious in some way.