The usage of the word overlap

Sociologist C. Wright Mills used the term power elite to refer to his theory that the United States is actually run by a small group representing the most wealthy, powerful, and influential people in business, government, and the military. According to Mills, their decisions dictate the policies of this country more than those of the voting public. Mills also pointed out that the influence of the power elite overlaps into many different areas. For example, a wealthy businessman may make large contributions to a particular political candidate.

When I read the passage and the sentence, which was highlighted, I get what it means but when I look up the word overlap, the words I expected do not turn up as a synonym.For example what I got from the sentence is that the influence of the power elite overpower or exert more influence than the rest of the people in a society so power elite can change the direction in a way they want in different areas.But in Cambridge Dictionaries Online , there are two meaning is referenced to this word that are : 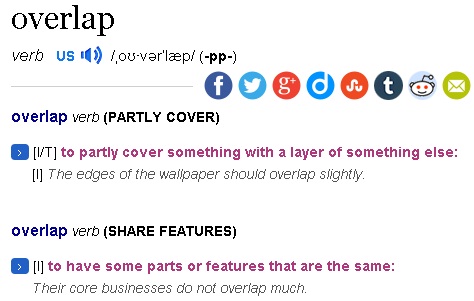 But I don't think the word overlap implies exactly what I got from the word or the sentence.Because there is no the same level of power or influence in a society.Am I right?

"Overlaps" refers to the fact that someone who is powerful in one area is often powerful in another area. For instance, Ronald Reagan was a well-paid "movie star" (in Hollywood), whose power "overlapped" into the political arena.