I am wondering about the meaning of word "arguably". I have of course read its definitions in dictionaries but they seem to differ.

As I am from Poland, I checked English->Polish dictionaries in the beginning.

Some of them say that "arguably" = "bezsprzecznie", which in Polish means that "something is sure and you shouldn't even discuss about it", I'd say that "unquestionably" would be a synonym.

Those definitions didn't really seem to be similar to me, so I decided to look up definitions in English to English dictionaries.

1.susceptible to debate, challenge, or doubt; questionable: Whether this is the best plan of action or not is arguable.

2.susceptible to being supported by convincing or persuasive argument: Admirers agree that it is arguable he is the finest pianist of his generation.

as may be argued or shown by argument

It seems to cover the second meaning from dictionary.reference.com.

I also checked the meaning of "argue" in English->Polish and it seems to mean "disagree about something" as well as "give a proof" (in formal, mathematical sense).

My problem seems to be that I don't know if 'arguably' in sentence means that the fact mentioned in that sentence is:

'sure', 'can be proved', 'you shouldn't have doubts because everyone knows that this is true',

'you can argue about it', 'it's one of possible options', 'it's just my opinion'.

Arguably is the exact opposite of “something is sure and you shouldn’t even discuss it”.

It means, literally, capable of being argued; and if you look closely at your two definitions from dictionary.com you will see that they both support this meaning:

1.susceptible to debate, challenge, or doubt; questionable: Whether this is the best plan of action or not is arguable.

That is, arguments may be advanced on both sides of the question of whether this is the best plan of action.

2.susceptible to being supported by convincing or persuasive argument: Admirers agree that it is arguable he is the finest pianist of his generation.

That is, an argument may be advanced that he is the finest pianist of his generation.

The difference between the two lies in different meanings of the words argue/argument. An argument may represent either

But definition 2 does not support the sense that “something is sure and you shouldn’t even discuss it”. Even the pianist’s admirers do not advance the notion that his status is beyond argument; on the contrary, they say that a good case can be made for his being the finest of his generation.

I am at a loss to account for your dictionary’s offering that meaning. Are you sure it isn’t addressing inarguably or unarguably, which do in fact have that meaning? Neither is used to mean “incapable of being asserted”—an odd asymmetry, but that’s English for you.

You've asked about a word that even poses problems for native English speakers. I found this usage note in The Columbia Guide to Standard American English1: 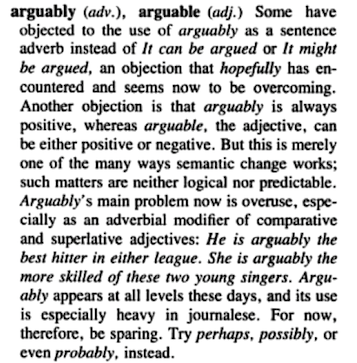 Essentially, that means that the usage of the word is evolving, and even now its usage is somewhat in a state of flux. That might help explain the apparent contradictions between Polish translations and English dictionaries, and even within English dictionaries themselves. Here's an even better example2 that shows how, if experts can agree on one thing about this word, they agree that not everyone seems to have a clear-cut view on how it ought to be used. The author calls the word "mushy," and then adds: 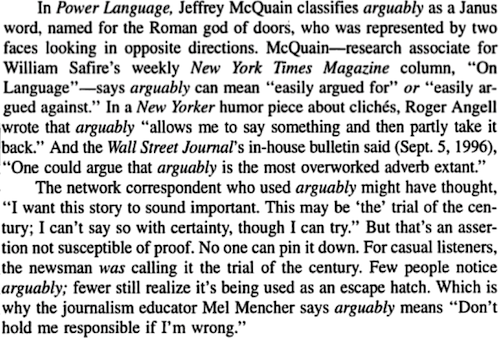 I often hear the word used in the way that these two books mention; that is, in a context like this:

Despite not winning a Super Bowl, the 2007 Patriots were arguably one of the greatest teams in NFL history.

In such contexts, the word carries this implication:

Not everyone may agree that they were the greatest, but most people would concede that they would be worthy of consideration.

I like these two dictionary definitions of the word, which at first glance might appear to contradict each other, but, upon further review, actually represent two sides of the same coin:

From Cambridge: used when stating an opinion or belief that you think can be shown to be true

From Macmillan: used for stating your opinion or belief, especially when you think other people may disagree

I might paraphrase both of those, and say used to state a credible opinion or belief about something that is subjective and therefore not necessarily provable, but nonetheless supportable to a certain extent.

It's also worth mentioning that this word is a bit trendy, only gaining popularity in the last 50 years or so, as evidenced by this Ngram:

As because you are from Poland probably you know Russian. Even Google Translate translates correctly - спорно.