What is the difference between gloomy and grim?

What is the difference between gloomy and grim, I have read some examples which confused me

I have read that grim is very serious or gloomy but still I am not aware about the difference between them, so please could anyone help me and explain the difference.

The words "grim" and "gloomy" are somewhat vague, so there isn't an exact distinction between them that most speakers would understand. As usual, the best way to understand these subtleties is to take note of their primary meanings (which are sometimes rare or partly forgotten), and follow how people reasonably extend those meanings to describe different situations.

The noun "gloom" primarily means the dull or dark lighting that you find at twilight, on a very cloudy day, or within a shadow—with the connotation of the melancholy or despondent emotion that people often feel in places with this kind of lighting.

Here is a very gloomy place: 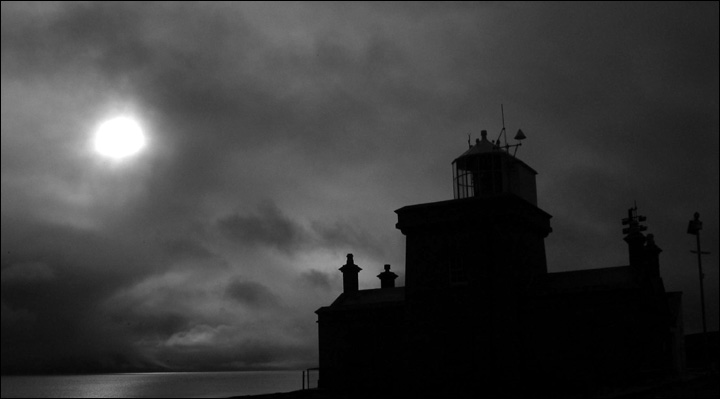 People often extend the primary meaning to describe anything related to that emotion, even if doesn't necessarily involve dim light, though usually the concept of dim light "colors" the description. For example, the poet Langston Hughes wrote these words to describe the closing of the Newport Jazz Festival in 1960:

It’s a gloomy day at Newport. It's a gloomy, gloomy day. The music’s going away. (Source.)

Notice that the noun modified by "gloomy" is "day"; and the day is called gloomy to express the sad and discouraged emotion resulting from the loss of the festival.

The adjective "grim" describes a mental attitude of determination to do a cruel or harsh deed, usually serving a very serious purpose, such as executing a convicted murderer. Secondarily, it suggests the facial expression of a person who has resolved to carry out such a deed and will not be stopped from doing it. For example, death is often personified as "the grim reaper", usually depicted like this: 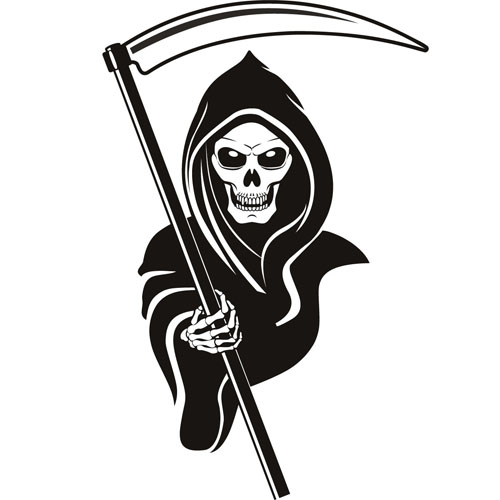 So, when call a place gloomy, you suggest dim lighting and/or a melancholy mood. When you call a place grim, you suggest that it's used for grave purposes and/or gruesome deeds. The sorts of places you would most easily call grim are gallows, execution chambers, slaughterhouses, prisons, battlefields (especially just after the battle), mortuaries, morgues. People often imagine that grim places are also gloomy; for example, in a painting or movie, you're likely to see a corpse-strewn battlefield depicted under a dark sky. So, there's naturally some overlap in how people use and understand these words.

Source for the gloomy image.

Source for the image of the grim reaper.

"Grim" is a more severe word that is often associated with foreboding, death, or something bad happening.

"Gloomy" is a softer word that means something closer to low-key, depressing, or dark. A rainy day can be gloomy, but it wouldn't be grim.

Gloomy can mean dark in the sense of not being lit very well, often connoting or implying that it's scary or depressing. Grim doesn't usually specifically talk about the light level of a place.

When used about people's emotions they have very different meanings. A gloomy person is feeling negative in a general sense and is likely to often feel gloomy, but a grim person is feeling negative more specifically, maybe because of a difficult situation. These different meanings - connotations - are carried over into the description of places, so gloomy is a place that makes you feel generally negative, yes, because of being dark.

Also in British English "grim" but not "gloomy" can be used as a general slang word meaning "really terrible". "The situation looked grim" is not slang but "His street is grim" is. It can be used with this sense in the North of England where I'm from.

Etymonline is very unsure as to the etymology. I believe that the word is a derivation of Latin lum-en, which belongs to the Latin word family light (lux/lucis, lumen/luminis, luminosus adj). Latin had a prefix in- used with adjectives having the meaning of not. Compare nobilis noble and ignobilis not noble (in- + n became ig-).

So I think that gloom has the primary meaning: without sufficient light. Of course, such an adjective as gloomy denoting poor visibility can be used to describe atmosphere and mood. Ben Kovitz's picture of a moon-lit landscape is a very good illustration for "gloomy".

Link to picture: Napoleon in Russia, retreat in winter: The situation for the French army was very grim. enter link description here grim

Not the answer you're looking for? Browse other questions tagged word-usage difference word-meaning .