Suppose that I have two objects, A and B (let's say two wooden cubes). If I arrange them in space like this:

the action would be stacking. I'm looking for a single word that is the equivalent of putting side by side:

Side-ing is not a valid word, apparently. :-)

(In case someone is curious why I'm asking: I'm a programmer, and I need the names of the functions that I write to be short and expressive, so the users will remember them easily and won't need to read supplemental documentation figure out what these functions are intended to do).

You are either aligning your blocks (that is, arranging them in a line) or juxtaposing them.

The latter (juxtaposing) works better if you have only two blocks; for more than that, go with aligning.

1[intransitive/transitive] to form a row, or to put people or things in a row

The books are lined up on a shelf above the desk.

This example from Macmillan dictionary is orthogonal (so to speak) to books being stacked (on my desk, for example).

If you want a word that means to place side by side and not vertically, I would stay away from "juxtapose."

I'm looking for a single word that is the equivalent of putting side by side... so the users will remember them easily and won't need to read supplemental documentation figure out what these functions are intended to do

The definition in the OED is rather disappointing:

To place (two or more things) side by side, or close to one another, or (one thing) by the side of another.

I mean, yes, the definition includes side by side, but that is not intregal to the definition. And note that the OED does say it can be other than side-by-side.

So what the function of juxatpose meant would confuse me, because it means..., actually the definition in the little Oxford Dictionary online (ODO) is better:

Place or deal with close together for contrasting effect: black-and-white 'photos of slums were starkly juxtaposed with colour images'

Notice: 'for contrasting effect'. This is integral to the definition, or at least to how the word is used nowadays.

Back to the ODE, two of its three example uses show this:

1879 Cassell's Techn. Educator iii. 191/2 When colours are juxtaposed, they become influenced as to their hue.

Notice the colors could be juxtaposed vertically.

The OED definition provides example uses over 100 years old, but today the word juxtapose primarily means to place close together (not: side by side) for contrasting effect.

Note the entry for the synonyms in US Thesaurus (ODO):

Synonyms of juxtapose in English: verb 1 the exhibit juxtaposes works by Van Gogh and Gauguin place side by side, set side by side, collocate, mix; compare, contrast

Note that the works of Van Gogh and Gauguin are not "placed side by side" because that is kinda, sorta alphabetical order, but because of the contrast between the works of the twp artists.

Note these images for "juxtapose": 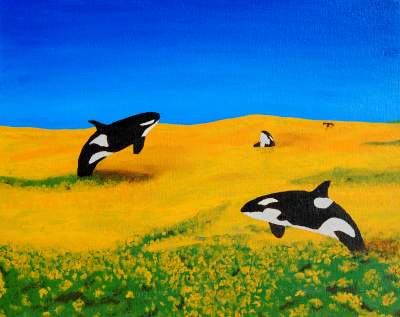 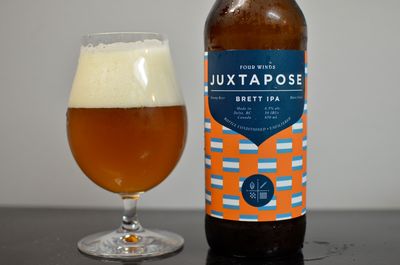 The glass and the beer bottle are not simply next to each other, they are in juxtaposition:

The fact of two things being seen or placed close together with contrasting effect: the juxtaposition of these two images

Lining up can mean side-by-side, but it can also mean behind one another.

As others have noted, aligning/juxtaposing work very well for the verb form, but if you wanted to describe the positioning using an adjective, I'd describe the blocks as adjacent to one another. This has a noun form: adjacency. Unfortunately, there is no verb form for this word.

As others have noted, "juxtapose" means what you are asking for.

That said, if we're talking names of functions in a program, and it sounds like you are trying to say that these two functions are related, one arranging vertically and the other horizontally, I'd want to give them names that have some similarity to show the relationship. Like "ArrangeVertically" and "ArrangeHorizontally", or some abbreviation thereof.

This would apply not just to programming but to any discussion where you want to make the parallelism clear.

Not the answer you're looking for? Browse other questions tagged word-request verbs or ask your own question.