How does 'to draw tight' relate to 'to press together'?

(TL;DR) What does to draw tight mean? Does it relate to: to press together?

I ask NOT about etymology. Here's my attempt to parse to draw tight. Is it right?
The verb 'draw' has many meanings, but here I guess 'to pull' as per Definition 2.

I guess that tight here is an adjective, as a predicative adjunct (aka Secondary predicate). However, ODO classifies it as an adverb also.

Draw tight as you surmise doesn't mean exactly the same thing as press together. They are opposite actions— pulling (for 'Draw tight') as opposed to pushing (for press together)— but both can have the same end result: something has been constrained or compressed into a space of reduced dimensions.

This is more clear if you provide an object, to draw [sth.] tight refers to pulling on it to constrict it. It's most common to speak of laces or a belt in this way, but you could also say

She drew the covers tight around her sleeping son.

The novice drew the parachute straps tight, so tight he could hardly breathe.

In other cases, the pulling does not imply a pushing or squeezing action. For instance, without an object, draw tight refers to the subject being pulled tight or taut:

The rope drew tight around his neck.

Her face was drawn tight with the strain.

As the sails fill with wind, the lines draw tight.

The soldiers drew tight as the shelling intensified.

Since the rioting, the shop owners have drawn tight against the mayor.

With regards to terminology: I have no background in linguistics, but to my layman sensibilities, having a secondary predicate would seem to require a main predicate, e.g. a direct object as in draw the knots tight. I would not call it an adjunct, as it is required to communicate the meaning; the children drew is something other than the children drew tight.

Thus, I would simply describe tight as a subject complement adjective. As I see it, draw tight is analogous to grow dark, wax lyrical, or turn criminal.

You draw drawstrings tight. There are some pictures with the wikipedia article.

In this context, draw means to pull. See wiktionary definition 2.1.

In this sense, yes it is similar to press together, but it's not you pressing anything directly. You pull something, and the effect is that it presses something else together.

To answer the question in your title:

"draw" can refer to the action of pulling on a cinch-rope or laces, e.g. shoelaces. When you pull the laces tight, the pieces are pulled together.

Imagine you have 8 beads on a string. 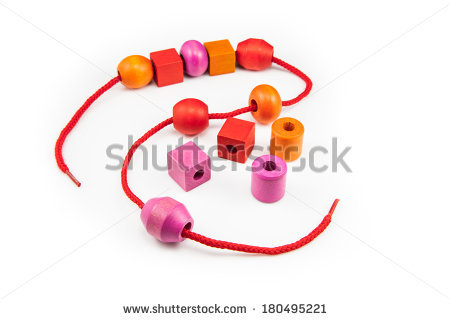 Tie a knot at one end. Take the bead closest to you and push it toward the knot.

What happens to the space between the other beads?

Now you can say that the beads are "tight." To draw in this case means to pull an object.

So "to draw tight" means to manipulate an array or series of objects so that the space between them is reduced considerably.

Not the answer you're looking for? Browse other questions tagged secondary-predicates or ask your own question.

12
“waterway … flowed sombre” - Should Joseph Conrad have used an adverb, not an adjective?

1
automobiles >as they relate to people< - What does the *as* clause modify?