MoneySense has presented its annual ranking of the best Canadian cities in live in, and when you consider their methodology, it should come as no surprise that half of the top ten are in the west, primarily in Alberta. It will also come as no surprise, particularly to Atlantic Canadians, of the low representation out east. Moncton, New Brunswick, is the first city east of Québec to rank, at #16. Fredericton takes the 22nd spot, and Halifax is 26th. St. John’s, Newfoundland, is the last eastern city in the top 50, at #37.

I have a bit of a hard time following the sentence in bold. First of all, what does of the low representation mean exactly? That Atlantic Canada is underpopulated? And what exactly will come as no surprise to Atlantic Canadians?

It will also come as no surprise, particularly to Atlantic Canadians, of the low representation out east.

A more straightforward rewording of the sentence is:

If you consider how the list of best cities was created, then it is not surprising that cities in eastern Canada were ranked much lower than those in the western and central parts of the nation. Atlantic Canadians will find this particularly obvious.

The author of your passage is stating that either the methodology of the rankings tends to reward western cities, discount the benefits of eastern cities, or both. The meaning of low representation is that the group in question, Atlantic cities, do not appear as often as one would expect based on their numbers.

There were only 18 Atlantic cities out of a total of 209 in the 2015 version of this ranking, so I'm not sure whether the author's assertion is correct or not, but that was her intent.

represent (v.) (be represented) (of a group or type of person or thing) be present or found in something, esp. to a particular degree : abstraction is well represented in this exhibition.

When the author talks about low representation, that's the sense of the word being used. In other words, Atlantic cites are not well represented on the list. There is a list of cities, and relatively few of these cities are Atlantic coastal towns, and none of those cities rank very high on the list.

Why is this unsurprising? That tidbit alludes to a perceived bias that Atlantic Canadians are already well aware of: the rest of the country doesn't seem to think we live in the nicer parts of Canada, at least from a livability standpoint.

As for whether or not these cities truly deserve to be left off the list (or be near the bottom), that's another matter, and there's not enough context in the snippet you've provided to say. However, I went to the source that you linked to, where I found:

when you consider their methodology, it should come as no surprise that half of the top ten are in the west, primarily in Alberta. There is a heavy weight on wealth and demographics. They also indicate that intangibles such as scenery and attractions are not considered, as “This isn’t the best places to visit, it’s the best places to live.” Weather, therefore, is part of their consideration.

The writer is hinting that you need to take this list with a grain of salt. Whoever compiled it puts little value on beautiful ocean views, and dished out heavy penalties for potential stormy weather. If a different panel used different criteria, where beautiful ocean views were weighted more favorably, and weather wasn't so much of a factor, their list might look very different, and Atlantic cities would be better represented. However, it seems like residents of those Atlantic cities are used to people overlooking their strengths and benefits, and focusing on the drawbacks, which is why they won't be surprised to find very few cities in their region on the list. 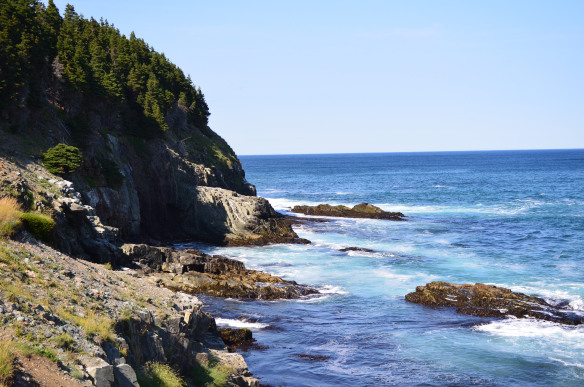 The beach at Middle Cove, a mere 10 minutes from the Atlantic city of St. John's

It's a nice place to visit, but I wouldn't want to live there.

The writer is saying that, by ranking Atlantic cities so low on their list, that's pretty much how the writers at MoneySense probably feel about many eastern Canadian coastal towns.

Jason Patterson did a good job explaining the intended meaning of this sentence:

I just wanted to comment on the grammatical structure.

A simpler but similar construction would be:

I imagine the author wanted to put the clause about it coming "as no surprise" first in order to create symmetry with the previous sentence. This is a nice rhetorical device, but it doesn't work very well when you bungle the grammar trying to reorder your sentence.

Here's a slight rephrasing of #1, restoring the order:

Simply removing the 'of' makes it grammatical. The phrase "the low representation out east" is called a postponed constituent. This form is called right dislocation. It gives the meaning of the pronoun occurring earlier in the sentence: 'it'.

Of course, just because it's grammatical doesn't mean it's easy to read. The intervening clause beginning with 'particularly' creates a lot of distance between the constituent and the pronoun.

Here's a form which keeps the "no surprise" clause at the beginning for rhetorical purposes, but is probably easier to read:

0
totaled 969 in the 2014 fiscal year, up 34 percent from 2012 — comprehension
5
the Russians have had their favorite, most-hated pindoses — I got a problem understanding what this exactly means
1
Problem comprehending “push the relatively small, for example the impact of the munition megaton class”
1
the risks to plot travel (comprehension)
3
it's an attempt to… but tweak… , to fit — I have a problem comprehending that
0
Listening comprehension (a war movie)
1
A Comprehension question