What's the meaning of 'lay over'?

Dictionary says 'lay over' means 'a short stop in a journey', 'stopover', but I don't understand this sentence translating 'lay over' as 'stopover'.

Here is the sentence, which is from 'Baker's blue-jay yarn' by Mark Twain:

And there's yet another thing; in the one little particular of scolding - just good, clean, out-and-out scolding - a blue-jay can lay over anything, human or divine. Yes, sir, a jay is everything that a man is.

(see the image below) 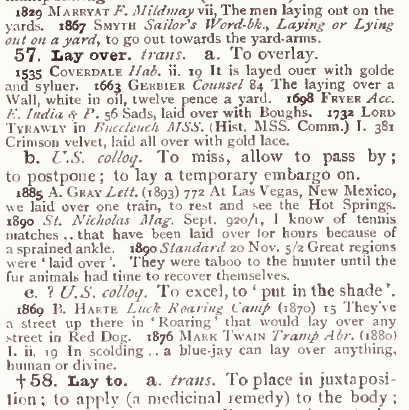 So, how can we understand our sentence in question?

First of all, I've never read this short story (What Stumped the Bluejays) by Mark Twain before, and I guessed the meaning of lay over wrong at first. Luckily, I found the text here. So, I think it's worth to discuss the text a little, enough that we can understand the sentence in the context.

Here is the introduction of the short story. The writer points out that a jay (a bluejay bird) is very good at language:

Animals talk to each other, of course. There can be no question about that; ...
[...]
There's more to a bluejay than any other creature. He has got more moods, and more different kinds of feelings than other creatures; and mind you, whatever a bluejay feels, he can put into language. And no mere commonplace language, either, but rattling, out-and-out book talk - and bristling with metaphor, too - just bristling! ...

Soon, the writer convinces us that a bluejay (or a jay) is not only as good as a human; a blue jay is really good at swearing! (Perhaps because a bluejay has lots of bristles (when bristle is a noun, it means "a short stiff hair"--because he's got feathers on him, according to the story) which makes him "bristling" (bristle the verb can either refer to the bristling of animal's fur and feathers or mean to be angry of offended about something) -- a great wordplay, IMHO.)

You may call a jay a bird. Well, so he is, in a measure - because he's got feathers on him, and don't belong to no church, perhaps; but otherwise he is just as much a human as you be. And I'll tell you for why. A jay's gifts, and instincts, and feelings, and interests, cover the whole ground. [...] Now, on top of all this, there's another thing; a jay can outswear any gentleman in the mines.

Now we reach the sentence in our question:

And there's yet another thing; in the one little particular of scolding - just good, clean, out-and-out scolding - a bluejay can lay over anything, human or divine.