Explanation of a paragraph about irony [closed]

Ask Question
Asked 6 years, 8 months ago
Active 6 years, 4 months ago
Viewed 838 times
1
It's difficult to tell what is being asked here. This question is ambiguous, vague, incomplete, overly broad, or rhetorical and cannot be reasonably answered in its current form. For help clarifying this question so that it can be reopened, visit the help center.
Closed 6 years ago.

It's your brother's MR. T PUPPET, which of course is kept in the apartment with a sense of profound humorous irony. But as usual with your BRO's exploits, this is no ordinary irony, or anything close to a pedestrian TIER 1 IRONIC GESTURE which is a meager single step removed from sincerity. This is like ten levels of irony removed from the original joke. It might have been funny like eight years ago to joke about Mr. T and how he was sort of lame, but that was the very thing that made him awesome and badass, and that his awesomeness was also sort of the joke. But in this case, the joke is the joke, and that degree of irony itself is ALSO the joke, and so on.

The first line is easy to understand; after that, I can't make a head or tail out of it.

This isn't a complex pun, it's just a paragraph that builds incredulity for comic effect (although to be honest, it's not particularly funny).

The entire purpose of the whole paragraph is just a poorly written, badly formatted, and frankly not particularly funny description of something that is supposedly an "in joke" to the n-th degree.

The levels are thus:

Mr T is a cultural reference to the man shown below, who is most famous for his role as B.A. Baracus, in the American Cult TV show "The A-team" in the 1980s. 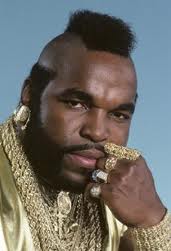 According to Wikipedia, this fictional character is described by a fictional reporter in the pilot show as:

Bosco Baracus. Known as B. A. for 'bad attitude.' The man is a mechanical genius. He also has one of the worst conduct records in the army. He likes to slug officers.

To get back to your original paragraph:

In the mental image, you have a brother, who supposedly likes being "ironic", and he owns a doll in the shape of Mr T.

At its most basic level, the in-joke is about Mr T, who was originally thought to be awesome (because of his portrayal in the A-team), but which you and your brother think is "lame".

But according to the speaker, this is not the reason your brother owns the doll. The in-joke that Mr T is "sort of lame" "might have been funny [...] eight years ago". No. The reason you have the Mr T doll is apparently much more clever and funny than simply a one-dimensional in-joke.

In particular, the funny thing is how extremely convoluted the joke is, and consequently how difficult for people other than you and your brother to "get" the in-joke, making it apparently all the funnier. This is the meaning of the sentence "Only highly adept satirical ninjas like you and your BRO can appreciate stuff like this" in the paragraph.

But when we boil it all down, what we see is that everything after the words "It is" is really just a complicated and silly description of a three-level meta-joke that is very ironic, with an example centering on a Mr T doll.

The literal expected behavior is the following: if something is good, you like it. If something is bad, you dislike it. The "irony" in this case is doing the opposite: liking something ironically means liking something because it's bad. (Note that "bad" in this case often means out-of-date, uncool, unpopular, and so on--in other words, something a trendy teenager might expect to be mocked for liking. This is represented by the word "lame" in your quote, though I try to avoid using that word myself.)

The joke here is that the concept of liking something ironically is being applied to itself. The first step is what I described above:

It might have been funny like eight years ago to joke about Mr. T and how he was sort of lame, but that was the very thing that made him awesome and badass, and that his awesomeness was also sort of the joke

The above quote describes the "tier one ironic gesture" ("which is a meager single step removed from sincerity"), which is supposed to sound funny and let you know that further "tiers" will follow. The second "tier" is applying the "irony" concept to this instance of liking something ironically:

But in this case, the joke is the joke

and that degree of irony itself is ALSO the joke, and so on.

This is like ten levels of irony removed from the original joke.

The point of saying all this is to make fun of the behavior and concept of liking something ironically, following it to its absurd and illogical conclusion. It's a bit like this quote from The Simpsons episode "Homerpalooza":

Not the answer you're looking for? Browse other questions tagged jokes understanding or ask your own question.

5
What is the meaning of “polarisation” in this paragraph?
2
What does “life is far too important to ever talk seriously about” mean?
4
Joke about catching a tame rabbit
16
A joke about owls playing pool
20
Can someone explain this joke about the Primer movie
3
What is the meaning of Annie's words about the author?
1
Can you explain about the constructions of the type “verb+noun+another verb”?
3
Is my interpretation of this paragraph from a horror short story by Arthur C. Doyle right?
2
SNL line about getting a donut
34
Explanation for a joke about a three-legged dog that walks into a bar