What is the pun in this joke?

When a couple divorce, there is often an argument over which parent gets to have their children live with them. Having responsibility for the children in this situation is called custody and hence the debate is known as a custody battle.

However, clowns (comedy circus performers) often have mock fights, in which a food substance known as custard is thrown around, often in the form of pies. Such a fight might be known as a custard-pie fight. However, a fight can be called a battle so it could also be referred to as a custard battle. You might describe the battle as 'custardy' i.e. involving custard.

The joke is about the word: /'kʌstədi/ (British RP transcription).

When you hear the joke, this word might mean to do with custard, in other words the adjective custardy. We can make adjectives like this by adding -y to a noun. So for example, take the compound noun Stack Exchange, we can make the adverb Stack Exchangey by adding this suffix:

Here the speaker is making a new adjective custardy from the noun custard. Custard is a dessert sauce that clowns use in their show. They throw custard pies at each other, for example. 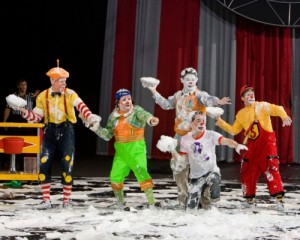 However, /'kʌstədi/ might also mean custody. This is a word we use a lot in divorces. It is about who becomes the legal guardian of the children. We use the term quite loosely, though. For example, we might talk about who's going to get custody of the goldfish!

Not the answer you're looking for? Browse other questions tagged meaning jokes pun .

3
Is pun objectionable?
41
"The first time I met my wife I knew she was a keeper. She was wearing massive gloves" - Alun Cochrane
4
Can someone kindly explain to me the pun in this advert?
74
What's up with the "pun (not) intended" thing?
3
Difference between Threat and Menace
6
she kicked me right in the teeth. Is there a pun in this phrase?
0
What is the pun that is intended in this sentence?
5
"I don't even know what comedians read! Comic books?!" What does this joke mean?
0
What is "pun intended, perhaps ? " here means ? what is the pun/joke in here!