Cook to the right temperature.

My question is why for that expression do we use the preposition "to" not "at", "in" or "under"? How would the meaning be different if we changed the preposition?

Unless I'm misunderstanding you, we don't use "to" the way you say... but I'm basing this on American English. Other varieties of English may use the prepositions differently.

"Cook to" is usually seen in recipes when you're being told to cook something until it reaches a specific temperature or to bring the food's temperature up to a particular point:

Here's a great image of a rack of lamb with a meat thermometer in it... as you can see in the image, the internal temperature is just above 130 F. 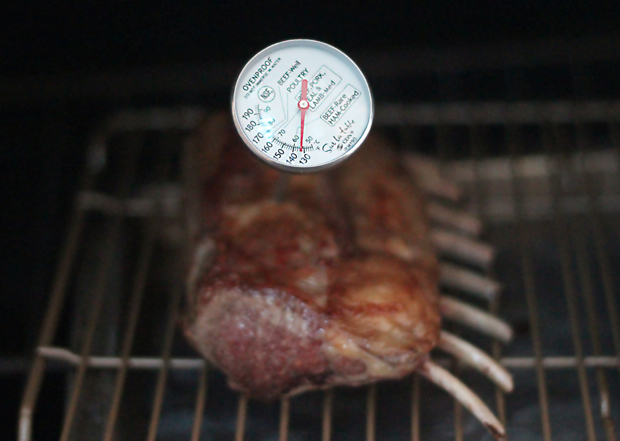 This is likely using definition 10 of "to" here:

10 a) as far as a particular point or limit:

In fact, the other way that this is phrased is

Cook until it reaches an internal temperature of 140 degrees.

When you say something should be cooked "under" the right temperature, I think you are correct to believe it should be "at" or "in". Let's go back to the example I posted above but look at a different sentence this time:

So, in this sentence, when it's being explained what temperature you need to set your oven for, we use "at".

This happens to also be definition 10 for the preposition "at":

With slight rephrasing, we also often use "in":

Rack of lamb should be cooked in a 325 degree oven.

And for this one, you can think of the fact that you're putting the food inside an oven that is 325 degrees.

As to "under", there's only one example I can think of where "under" would be appropriate instead of "at" or "in" and that's in the case of using a broiler.

A broiler is a special heating element in an oven that is designed to cook food from above. Placement of heating units in ovens varies by oven but broilers are always above the food when actively broiling.

In the United States, when the heat source for grilling comes from above, grilling is termed broiling.

Because of this, we regularly say "under the broiler".

6
"While you're *at* it" - Why *at*?
11
Preposition before noun phrases - omission of "in"
5
Gerund phrase after the preposition "in"
4
Are all verbs that follow a preposition gerunds?
1
Is a preposition missing/misplaced in this sentence from an NYT article?
0
"State all the languages you can speak __", the suitable preposition