How does the grammar work in "here be dragons"?

Why is the phrase here be dragons not here are dragons? Is this a special grammatical form? If so, what is it?

I found a related ELU question on the topic.

I thought I'd add this as well, just for those who are inferring that "Here Be Dragons" is an inference on the illiteracy of the scholars during the middle ages. I've separated it out from the other answer because it's not a direct answer to the question.

Anyway, "Here Be Dragons" is actually just an example of Old English (it is invalid modern English)- in particular it's just an inversion of a sentence in the Old English sentence ordering.

Is an inversion of

[if] here, there Dragons are

Be he alive or be he dead, I'll grind his bones to make my bread

is an inversion of the sentence

[if he is] alive or dead, I'll grind his bones to make my bread

Note that the subjunctive form in English is still there, so we can construct our own sentences to show that this is still valid English so long as we shuffle the word order around:

I must insist that you be here by 9 am tomorrow for a debrief.

I agree with the recommendation that komodo dragons be here in the public part of the zoo where visitors can see them.

So anyway, long story short is that "Here Be Dragons" used to be valid English, but no longer is. Its use idiomatically is used to insinuate "oldness" rather than "illiteracy".

I haven't been able to discover exactly where the notion arose that Ancient Mariners inscribed their maps with “Here be dragons”, “Here be demons”, “Here be treasure” and the like legends (the earliest use I've found dates to 1892, and clearly speaks of this use as an established fact).

But I feel reasonably certain that Here be was not intended to represent illiterate speech but either period or regional dialect. Be for all persons and numbers in the present indicative is supposed to be characteristic of West Country speech, and Devon in particular has strong traditional connections with sea-faring folk: “Drake, he was a Devon man”, and the stock “pirate speech” of Hollywood is the generic dialect which theatre people call “Mummerset”. The same conjugation is found in 19th-century “historical” novels and mock-mediaevalism:

”This is a strange shaft,” said the lad, looking at the arrow in his hand.
”Aye, by my faith!” cried Bennet. “Black, and black-feathered. Here is an ill-favoured shaft, by my sooth! for black, they say, bodes burial. And here be words written. Wipe the blood away. What read ye?”
—Stevenson, The Black Arrow, 1888

“I tell thee, Brother Nicodemus, thy offences are numberless as the weeds which grow by the way-side. Here be many who have much to say of thee : —speak, Brother Ulick!”
—William Clarke, Three Courses and a Dessert, 1830

See also Sensational spelling. It has similar effect, but using literate, but rare or dialectal spelling of a word or phrase.

In this particular case, it is ridiculing about pirates who were usually illiterate when they made maps of their treasures.

In "Here be dragons", "be" is an archaic subjunctive plural form. The subjunctive mood is a flexible grammatical instrument for expressing different gradients in thought when referring to events that are not stated as fact. I.e. "here be dragons" means "here are supposed to be dragons (as they say)", not just "here are dragons (a true fact)". The grammar is perfectly legitimate for 500 years ago.

"Here be dragons" is an idiom used to denote dangerous or unexplored territories, in imitation of the medieval practice of putting dragons, sea serpents and other mythological creatures in uncharted areas of maps.

It is only ever used in its grammatically incorrect form as an idiom meaning "this is uncharted territory", or somewhere that is unexplained and to be avoided, particularly in the context of a map or a place that is out-of-bounds or unexplored.

For example, this map is taken from XKCD (a online, English-language computer-related comic strip) which references the "here be dragons" idiom in the top right: 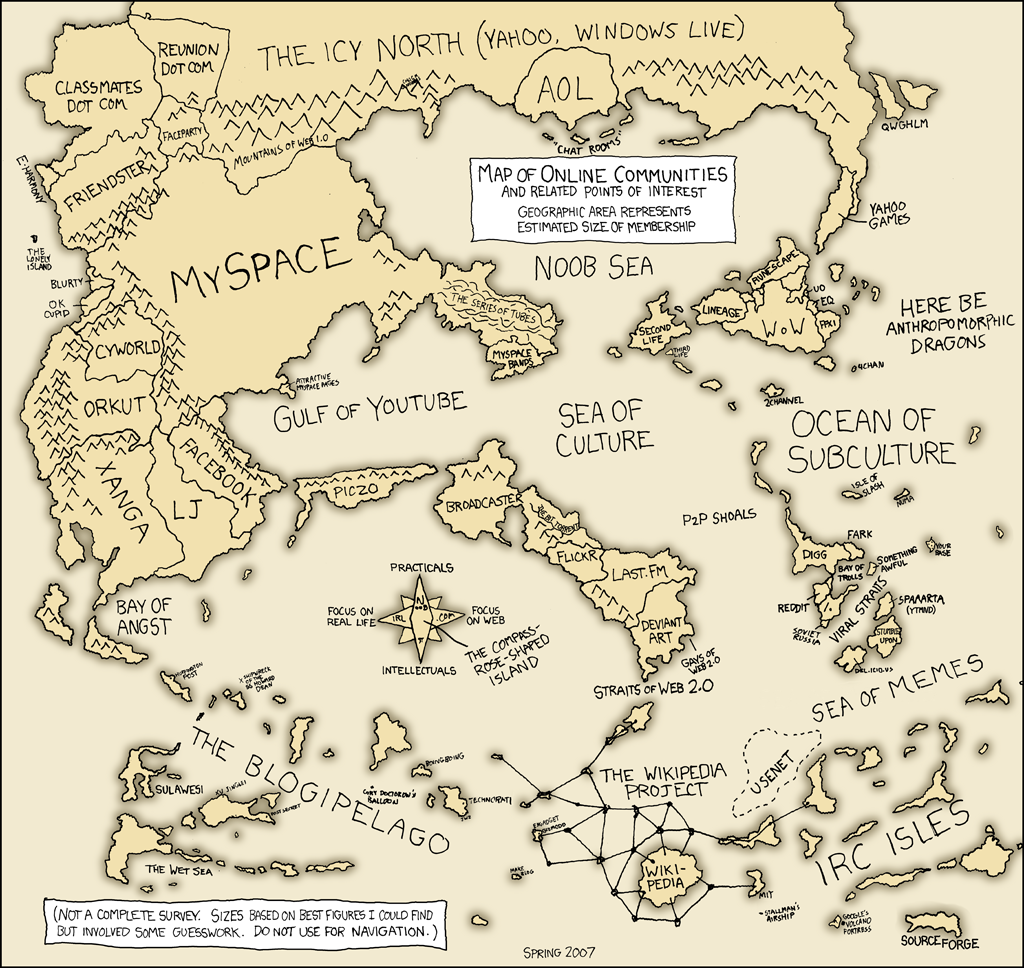 Be careful when using this idiom. It is very informal, and can lead to offence in some circumstances. (e.g. "Don't talk to the people on the floor below - there be dragons down there" may cause offence to people from the first floor who overhear).

If you intend to say literally "There are dragons at this location", you would use the grammatically correct forms

There are dragons here.

Or the active form:

No, it's completely incorrect and a purposeful mistake to imply incompetence and lack of education of the alleged cartographer who made the map, or whoever wrote it.

Not the answer you're looking for? Browse other questions tagged verb-forms dialect history .