What is the better way to ask person which floor is he living in / on?

If my friend lived on a college campus like this one: 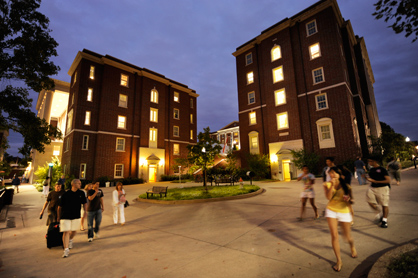 then I would ask:

If the university had more than one campus (say, an east campus and a west campus), then I might begin with:

Same goes to "level", for instance. A "level" is [originally] a measure, the distance from the base point or plane. Since a representation of such a measure would be another plane or a sphere (if measured from a point), in other word a surface, it has no thickness, and only allows being "on" it, not "in" it for such three-dimensional beings like humans.

I think the correct one would be..

On which floor are you living ? Which floor do you live on ?

There is no need to use in/or twice in the same sentence. On is used more often when talking about living on floors.

In the context of asking someone which floor they live on:
"Which floor are you living on?" or "Which floor do you live on?"

More natural:
"Which floor are you on?"

2
Should I say “What are we going to study 'in' / 'by' this presentation?”
0
Should I say “what is beautiful in/at this thing”?
0
Should I say, where are you going to or where are you going?
1
I'm waiting for you ON/AT/IN the second floor?
0
“There is a pharmacy {on/in/at} the 2nd floor.” - which preposition is correct?
1
Which preposition should I use here:You are not listening! What are you thinking __?
0
“Come and sit on the bed along with us”, is it correct?
0
To the floor vs. on the floor