What is meant by “grammar”?

Some people equate grammar with any rules governing the language. Some people believe grammar is language itself minus whatever is being discussed in the shade of "meaning" and "comprehension". Some people think "grammar" is anything that prohibits them from uttering some words, morphemes or phonemes together.

So, what is grammar? What criteria should we use to call something a "grammar rule"?

Grammar is syntax and morphology.

Grammar is not semantics, pragmatics, phonology, orthography, or the lexicon.

The definition of grammar in David Crystal's A Dictionary of Linguistics and Phonetics (2008) is quite long and describes a number of different uses of the term. Here is a short excerpt:

[G]rammar refers to a level of structural organization which can be studied independently of phonology and semantics, and generally divided into the branches of syntax and morphology. In this sense, grammar is the study of the way words, and their component parts, combine to form sentences.

This, he says, is the "traditional sense in linguistics", but it's certainly not the only way the term is used. Still, if you were to ask me what grammar is, this is the sense that comes to mind.

I also think this is probably the most useful general definition of the word. If you don't include word formation, then you have a synonym for syntax, but we've already got a word for that: syntax. And if you include everything under the sun, grammar doesn't identify anything in particular.

Using this definition allows us to talk about how grammar interacts with other language components. The Cambridge Grammar of the English Language (2002), pages 3-4, summarizes the interactions like this:

Grammar versus other components

A grammar of a language describes the principles or rules governing the form and meaning of words, phrases, clauses, and sentences. As such, it interacts with other components of a complete description: the phonology (covering the sound system), the graphology (the writing system: spelling and punctuation), the dictionary or lexicon, and the semantics.

Phonology and graphology do not receive attention in their own right here, but both have to be treated explicitly in the course of our description of inflection in Ch. 18 (we introduce the concepts that we will draw on in §3 of this chapter), and Ch. 20 deals with one aspect of the writing system in providing an outline account of the important system of punctuation.

A lexicon for a language deals with the vocabulary: it brings together information about the pronunciation, spelling, meaning, and grammatical properties of the lexical items – the words, and the items with special meanings that consist of more than one word, the idioms.

The study of conventional linguistic meaning is known as semantics. We take this to cut across the division between grammar and lexicon. That is, we distinguish between lexical semantics, which dictionaries cover, and grammatical semantics. Our account of grammatical meaning will be quite informal, but will distinguish between semantics (dealing with the meaning of sentences or words as determined by the language system itself) and pragmatics (which has to do with the use and interpretation of sentences as used in particular contexts); an introduction to these and other concepts used in describing meaning is given in §5 of this chapter.

A grammar itself is divisible into two components, syntax and morphology. Syntax is concerned with the way words combine to form phrases, clauses, and sentences, while morphology deals with the formation of words. This division gives special prominence to the word, a unit which is also of major importance in the lexicon, the phonology and the graphology.

Of course, this isn't the only way the word has ever been used, and it's certainly not the only way the word is used today. For example, you may hear generative phonologists talk about the "phonological component of the grammar". If you're working in that sort of grammatical framework, the short answer I gave at the top isn't right for you.

grammar (n.) A central term in linguistics, but one which covers a wide range of phenomena, being used both in mass noun and count noun senses (as ‘grammar in general’ and ‘a grammar in particular’). Several types of grammar can be distinguished.

But as detailed as this is, it doesn't cover every way the word has been or is used. I've seen people give definitions as general and vague as "Grammar is what people say". Unfortunately, people simply don't all agree on what grammar means.

Still, I think grammar does have a usual meaning in linguistics, and that meaning is what I put at the top of this answer. The definition I've given is commonly used because it's useful. It lets us make distinctions that help us talk about language. I'll repeat it below:

Grammar is syntax and morphology.

Grammar is not semantics, pragmatics, phonology, orthography, or the lexicon.

Since I believe we should get our meaning of grammar as close as possible to the learners' world, I've decided to formulate the definition from what is categorized under "grammar" sections in EFL coursebooks and exercises, rather than looking at linguistic or dictionary definition of the term.

It would be exhausting to list all the topics I have found, but here are some of them that are most common (regrouped and relabelled by me; most of these are not this technical in the books):

The widespread definition at present that fits here best is

However, as I've noted, word formation, obviously part of morphology, is usually not put under grammar. Most of syntax, on the other hand, is considered part of "grammar," but since syntax often excludes semantics-pragmatics, we have to define it more specifically, as EFL often approaches grammar in a more practical, in-context way.

The following is what I believe should be the definition of "grammar" here.

grammar is the set of rules of how words are put together to form meaningful structures, such as phrases and clauses, and of how they change forms.

The "not" criteria should have higher priority.

A question is not a grammar question when ...

A question is a grammar question when ...

I will update my answer when I have done more research and have free time. Meanwhile, please voice your comments.

You could do a lot worse than go back to 1640 for the first grammar of English written in English—to the best of my knowledge the only grammar by an English author of the first rank, Ben Jonson. Here is the entire first chapter. 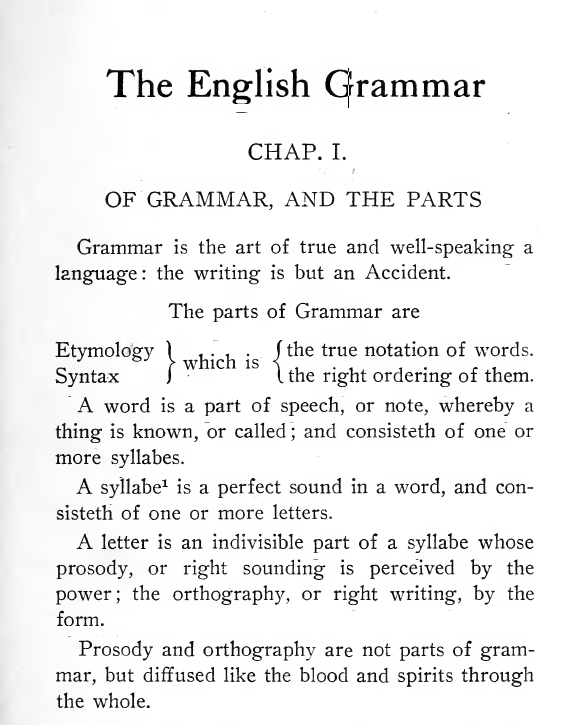 Jonson's terminology is very strange to a modern reader; but once you get past that it's pretty sound stuff.

After referring several dictionaries, I found this close to what I mean grammar of any language.

grammar: (linguistics) the branch of linguistics that deals with syntax and morphology (and sometimes also deals with semantics).

If you see, it includes semantics though it writes 'sometimes'. But overall, the structure of the sentence with proper tenses and placement of the words would make a typical question of grammar.

Relevant to the meta discussion this question hails from:

For what should have the tag 'grammar', a typical example I see is here. For non-native speakers, putting the grammar tag to this question is the most obvious thing. If the OP keeps prepositions and infinitive vs gerund tag, that is his further knowledge which might not be an obvious thing to many non-natives.

Grammar has a meaning, i.e. current usage as defined in the dictionary. Jonson's def of grammar stood for 300 years, and it is echoed in the dictionary entries of today. Based on my knowledge and experience it may have began to morph somewhere post WW2 in common usage. Although, I think said morphing is arguable. The definitions do give grammar a very wide scope.

While I completely understand the reason for trying to define grammar more closely, that there is a lack of filtering, I am strongly critical of attempts to redefine words. A word has a meaning. If something else is meant, then one should use a different word. Redefining words leads to muddy and unclear communication. In the case of an English learner, I would think it would also lead to a high potential for confusion. There is another way to accomplish the results that are desired here.

I am strongly supportive of the desire to communicate with the learners expressed in this p.o.v.:

Since I believe we should get our meaning of grammar as close as possible to the learners' world, I've decided to formulate the definition from what is categorized under "grammar" sections in EFL coursebooks and exercises, rather than looking at linguistic or dictionary definition of the term.

But, as I've said above, I think that redefining grammar is not the answer. Rather take a lesson from judo: redirect the energy. The best answer lies in making the tag system work in our favor. I've addressed my thoughts on blacklisting etc. in the meta-posts that led to the creation of this question.

Here: A proposed solution to the "grammar" dilemma and then here: Is this tag useful? Big Boss grammar

Basically, imo, leave Jonson's definition alone. Don't confuse things by trying to redefine something that is already defined. Redirect the energy for tagging going forward. The answer to the grammar dilemma lies in better tag usage.

In my understanding, grammar rules explain how to correctly spell words, build sentences, phrases. It's just a set of rules on how to use the language correctly.

Not the answer you're looking for? Browse other questions tagged grammar definition or ask your own question.

2
Does the word “semantics” make sense in this context