If the sentence in the singular is:

The butcher's and the hairdresser's are closed on Sunday.

What happens to the genitive if I want to make it plural?

In British English they call it the butcher's, because "shop" can stay implicit. My question is: if I want to say all the butcher's shops are closed, can I still leave the word "shop" implicit and therefore say: Butcher's are closed on Sunday? Meaning "butcher's shops"? Why would I loose the genitive in the plural if I had it in the singular? If I drop the apostrophe and I say the butchers (plural) does it not mean the butchers = the people who work in those shops?

(The item possessed by the butcher - the shop - is implicit, but real. Which is why it is fine to say butcher's. You are essentially abbreviating butcher's shop down to butcher's.)

The usual use of butcher's is to refer to one individual shop. If you said "The butcher's are closed", it might easily be perceived by the listener that you mean your usual butcher's shop is closed.

You might want to say "All the butchers' are closed on Sunday" for clarity.

Because the butchers is a plural word ending in 's', the English possessive is butchers'.
For documentary support : q.v. Wikipedia - English Possessive (link) and Purdue University Online Writing Lab : The Apostrophe (link)

This type of errant apostrophe is not uncommon. Fowler's Modern English Usage notes many such usage. Though it rises some eyebrows but it still appears -

The use of these apostrophe is to make the noun plural, when the noun ends with a vowel. Example - grotto's, opera's, toga's etc.

This use is often called the greengrocers' (or grocers') apostrophe because of the frequency with which plural forms such as apple's, cauli's, orange's etc appear in their shops.

But your question is somewhat different to what I have written so far. I wrote it to introduce such use of apostrophe.

Now coming back to your question.

Butcher is actually a person who sells meat or cuts meat for that purpose.

A butcher's is generally used to mean a shop where meat is sold.

A fishmonger is a person who sells fish. So the shop where he sells fish is called fishmonger's. But that is actually a old use. People now prefer to write a fish shop.

Bakery can only refer to a shop where bread is baked. But it's rarely used for shop. The baker's is the usual phrase.

These genitives have two plurals when used with 'shop'.

Several butcher's shop or several butchers' shops. The second phrase is preferable. Some people consider it the only correct form.

But several butchers is used by far the most frequently. 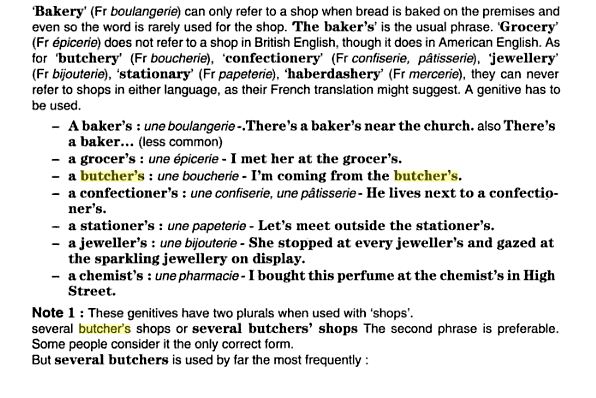 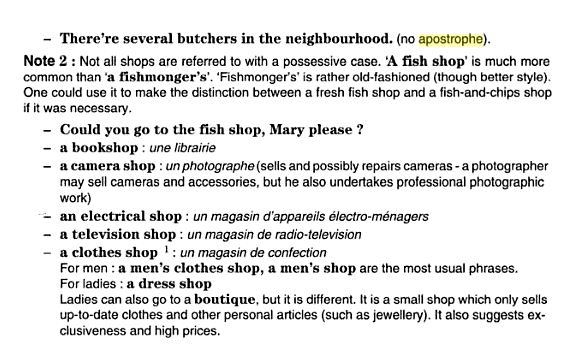 According to Oxford Advanced Learner's Dictionary the plural of butcher's is butchers.

In practice, they don't skip "shops" or "stores" while using plural.

I am not sure the question is right. It may be a little flawed because I remember plural of butcher is butchers and the shop is called butcher's shop in UK English and butchers shop in US English (for reference, please check the butcher shop section:here).

I think you make words(more specifically Nouns) plural and not sentences.

A sentence is a mere combination of words to make sense.

The butcher's shop and the hairdresser's shop are closed on Sunday.

for which the plural form would be

The butcher's shops and the hairdresser's shops are closed on Sunday.

Again, you need to be sure what version of English you would like to use.

The correct way to structure your sentence (here in the U.S.) would be:

Butcher shops and hair salons are closed on Sunday

In this sentence, the adjectives butcher and hair modify the nouns shops and salons.

Not the answer you're looking for? Browse other questions tagged british-english plural-forms possessives .

3
I went to the doctor's
2
I'm going to the dry cleaner's - why the apostrophe S?