Its or Their to refer to a company?

The company will issue (their, its) annual report next month.

Both its and their are pronouns. While its is a singular pronoun, their is a plural pronoun.

So, depending on that, both are correct.

The company will issue their annual report next month.

Your question: should I use its or their in: The company will issue their/its annual report next month?

In this instance, I'd recommend using its:

This, among other things, echoes Kelly's answer and Fantasier's answer to an old question: "If a collective noun is seen as a whole, sole, impersonal unit, then singular verbs are more common. If it is seen as a collection of people doing personal things, then plural verbs are more common. In American English the verb for the noun is usually singular in all cases except family (if you don't quantify it with members of, people in etc)."

Which also echoes an old answer by FumbleFingers: "(in "British English") [W]e quite naturally use singular or plural for things like company, family, group, according to context", and information relating to collective nouns which is relatively to find around the web, including on English Language & Usage Stack Exchange.

Back to your sentence, it's clear that it's safer to use its in either British or American English. Even though it may be possible to use their in British English (and also in American English), I'd personally use it in that specific instance; and though I can't say exactly why, this Google Ngram chart appears to support my choice: 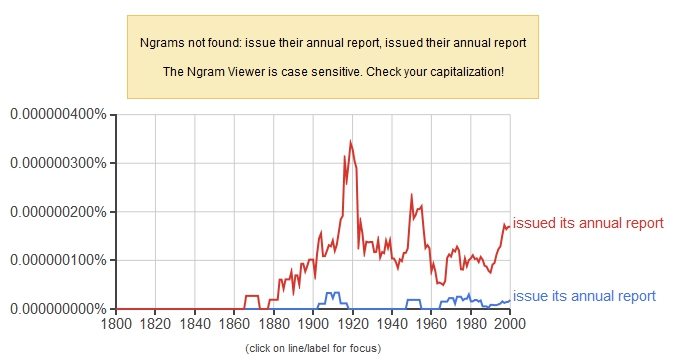 For what it's worth, Google Books Ngram Viewer would suggest that company is more often treated as singular.

But all you can really draw from this is that it's acceptable to treat company as either singular or plural.

I think it comes down to whether or not you want to emphasise the single legal entity or the group of people who make up the company.

In the case of an annual report, it is issued by the single legal entity and so I would use the singular:

The company will issue its annual report next month (AmE)

In BrE, companies are often called with a plural pronoun

The company will issue their annual report next month (BrE).

If you are talking about the 'company' use 'it'. If you are peculiar about mentioning the owners or authorities, mention 'their'.

The company will issue (their, its) annual report next month.

A company in this grammar is classed as a single entity, so will release its (as ownership) annual report.

A Board of Members would release their (joint ownership) annual report.

Not the answer you're looking for? Browse other questions tagged pronouns grammatical-number or ask your own question.

0
Its/ their, which one is the most correct?
5
Band Name Grammar
3
Verb agreement: We [company name]
1
Team as singular or plural
1
Need clarity regarding Third-person-singular conjugation in a sentence
0
Produce or Produces. Why should I choose one of these options and, what is the grammatical rule for its use in this expression?

0
“their” referring to “it”
0
Could I use the pronoun “their” instead of “its” in this sentence?
8
My dog has a lot of things. This food bowl is “its”
0
Use of “it's or their”
1
Pronouns : One's / their
1
its or their when talking about body parts
0
Which is correct, “their name” or “their names”?
1
What does “they” do in “Though wise men at their end know dark is right, Because their words had forked no lightning they”?
1
their or whose?