If 'God bless someone/something'; is it positive or negative? Same with 'All the best'?

I have heard it both:

And also, when someone/thing is ruining up completely, we use the same greetings.

For instance, a newly appointed CEO is very badly known for his mismanagement. For a company called ABC, we then say,

It clearly means that 'save ABC' from whatever is happening.

The question is how do we take god bless something if someone just utters it without any further comment/explanation. Because the greetings in many cases come as a standalone sentence.

The complexity doubles when you don't know the context. And, it can happen.

For example, if I'm getting migrated to a new country and some friend of mine living in the same country or having experience in visiting it greets - "Are you going to XYZ? Ah, 'God bless you!'"

When we use 'god bless' to an inanimate thing, it is generally negative and taunting. But then this is not true in case of 'God Bless America!'

The same thing is with 'All the best'. I've encountered many guys greeting 'all the best' in a sarcastic way. Say, a project in my company is completely ruined, and it is confirmed that the client has gone bananas due to several reasons. Now, if I'm replaced as the Project Manager has knows 'in and out' about the client and the project but has resigned from the company. He meets me for the final time and says, "Ah, you are on that project? All the best!' (chuckling!)

The phrases "God bless X" and "All the best" are nominally positive, but can be used in a sarcastic manner.

Context is everything when it comes to sarcasm, and sarcasm can be used on any nominally positive (or nominally negative) phrase. You may as well ask whether "I really love Minions" is positive or negative.

If there is no context, then there is no reason to assume that a phrase is meant sarcastically, and hence it should be taken at face value. For the examples this would mean that they are (almost certainly) being used positively.

What is a blessing? In any way, something beneficial.

Unless you have reason to presume the speaker meant the latter, simply take it as an expression of goodwill.

Worth noting that I'm irreligious and I still often use the term "God" without referring to a divine entity.

God bless you for writing this question! (Positive, animate) I've just arrived back home to find that the cat has knocked over and broken my favourite wall hanging. God bless him, I'm gonna kill that cat when I find him! (Negative, animate). This god blessed keyboard is running out of batteries, so I'm off to find some new ones. (Negative, inanimate) 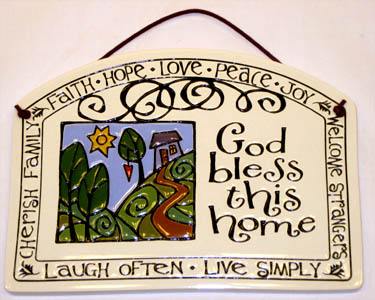 Some of the constructions in my account are a little awkward; I might replace the negative ones particularly with "God help this cat" and replace the sarcastic "god blessed" with the more sincere "god forsaken".

Which I take to be entirely neutral, a response rather than a sincere blessing.

The same thing is with 'All the best'.

Same arguments, it depends on context and tone.

There are some sincere sentiments that Brits are unable to say without sounding sarcastic!

The default is for "[God] bless X" to be a positive expression.

There are particular ways to use it that are very often meant negatively. The most famous one is "Bless [his/her] heart", which sounds like it means "That was such a thoughtful and kind thing [he/she] just did," but at least nine times out of ten it really means "Holy cow, that was a dumbass move [he/she] just pulled."

And there are other uses that are just rote phrases and don't mean anything at all, such as "Bless you" after someone sneezes.

I believe it's got a lot to do with the context in which you say it, not so much the nature of the subject being blessed.

Adam's going to that loan shark to explain why he's got no money. God bless him.

Usually, as others have said, it's to be understood in a positive light. However, it can be used in moments of frustration as a minced oath. Instead of saying "God damn it", "God bless it" or "God bless America" can be used to catch oneself from using God's name in vain (for something trivial such as missing a golf shot or a throw of a piece of garbage into the trash).

"God bless him" can imply an innocence or naivity for which one requires the blessing or care of God in order to survive.

So He's going to ride that bike of his all the way up to Bogus Basin, God bless him!

Meaning: He's childishly optimistic, a simple fool, and it may not end well unless God looks out for him.

There is also the suggestion that the endeavour is not one which you or I would undertake, being not so confident of receiving the grace or good will of God.

There is also the suggestion that in saying "God bless him" he belongs to a class of people of whom that is normally said, e.g. child, sick, infirm, foolish.

The word silly had similar connotations in medieval times, meaning happy but referring to the carefree childlike happiness of the mentally impaired.

Not the answer you're looking for? Browse other questions tagged word-usage meaning-in-context .