What does “making up the stagger” mean?

I felt surprisingly smooth and relaxed as I rounded the first turn and found myself making up the stagger on the runners on my outside.
—http://blog.oregonlive.com/runoregon/2008/07/allcomers_meet_joes_report.html

What does “making up the stagger” mean in that context?

stagger : to arrange (things) in a series of different positions or times (Merriam-Webster) 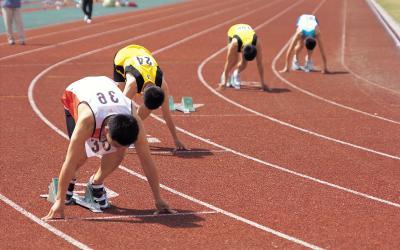 At the first turn the writer, in an inside lane, has "made up" some or all of the "stagger"—has reduced the distance which initially separated him from the runner in the next lane. Speaking of a "first turn" implies that there are more turns to come, so if the writer has actually drawn even with the other runner, or passed him, he has actually "gained ground" on his rival: traversed a larger proportion of the total distance.