Short background story: a young guy from Kansas moves to New York City in high hopes that he will build a more interesting and financially better life. He's already got a job there and the following is what happens to him on his first day of work as he shows up at the office.

— Hi, I'm Brantley Foster from Kansas. You hired me. I start work here today.
— You're fired, kid. Sorry. We all saw it coming, but we looked for some kind of miracle. Miracle never happened.
— What did happen?
— Hostile takeover. Ninety percent of the people in this building are out on the street. You are one of those ninety percent. Tough break.
— Mr. Forbush, I was counting on this job. What do I do now?
— Punt! (and he leaves)

I don't seem to be able to figure out what exactly Mr. Forbush, the boss of the company that just went out of business, means by that.

I can't claim to speak from an area of great experience here -I'm not much of a sports guy, but here's how I've usually interpreted the expression.

In American football a team that does not think it can score a touchdown may instead chose to give up on scoring and instead punt the ball further downfield to simply put the other team at a disadvantage. So "punting" literally means to kick strongly but usually implies either a lack of strategy, giving up, delaying or gambling.

It may have slightly different meanings depending on context. In politics "punting" is linked to the expression "kicking the can down the road", or dodging responsibility by leaving a mess for someone in the future to clean up. Perhaps the most frequent common usage is to "punt on" an issue or question by leaving it unaddressed. It appears the British (and possibly others) use the phrase to represent a large gamble, but I'm less familiar with this usage and the sports analogy may differ for rugby.

Since it is a slang term it may be difficult to say exactly what was intended here, there are a few different interpretations.

I suspect in this movie, the boss is telling him that he is screwed, and has no viable strategy remaining. So the boss is probably telling him either to "give up" or "pray".

It's an American football reference. It's a common metaphor to describe a change in tactics, typically moving forward into the unknown or less certain future, when you have been unsuccessful in the short term.

"A punt will occur is a team has reached fourth down and has decided that instead of attempting to go for a first down, they will give the ball back to the other team by using a punt. This enables the team to push the ball farther down the field, farther away from the end-zone on which their opposition is attempting to score." --SportingCharts.com

In American football each team has four "downs" -- four chances to move the ball forward at least 10 yards toward their opponents end of the field. After three attempts to advance 10 yards, if they don't think they will be successful, they will typically kick the ball as far as they can, setting the other team back, and giving them the chance to re-capture the ball and try again later. 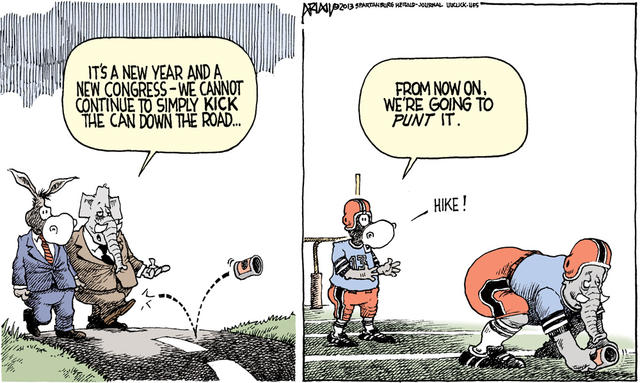 "Punt" also has informal meanings like "goof off", "go for a boat ride", or "procrastinate instead of working on a difficult problem".

It's an old idiom that addresses indecision. My dad used to use a form of it all the time: "If you don't know what to do, punt." Or, "Hey, if you can't make up your mind, punt."

It's not a metaphor for kicking the ball down the road, or screwing off, or any of that. It means, "Make up your damned mind and pick something." Punting isn't really being advocated—it's the absurd alternative to making up your mind.