packet [countable]:
1 (British English) a container made of paper, plastic, or cardboard that something is sold in
2 (especially British English) a small flat package that is sent by post or delivered to someone
...

So the picture bellow would be called a packet of spaghetti in British English, but not in American English: 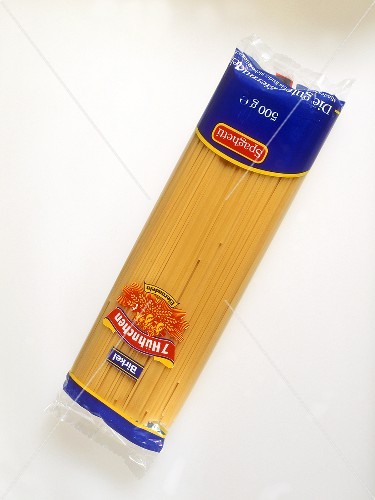 Let me elaborate on the comments a bit.

If you were to show me this picture and quickly ask me what that is called, certainly the first thing I would say would be, "package of spaghetti."

There are other options, as you'll see from the numerous words used in the comments, but they do have slightly different connotations.

Packet is the next closest possible option (for the image you showed). In my opinion, however, when I think of a packet of food, I think of a small package of something small or granular. For example, a packet of sugar: 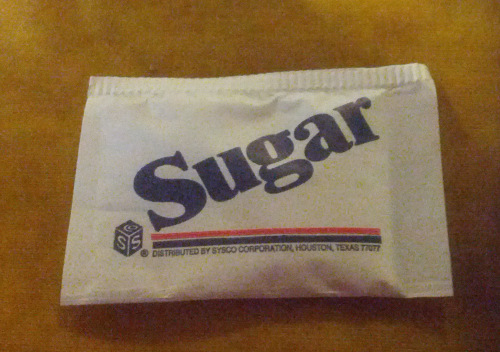 Container can really be applied to almost anything, but it's a broader term. I don't think that'd be the first word used here.

Pack is also possible, but I find myself using that more for processed things. In other words, I would say "a pack of pencils" or "a pack of cigarettes," but NOT "a pack of flour."

I can't believe I didn't notice the WORD CHOICE notes at the end of that same Longman Dictionary webpage:

A package is a parcel, usually sent by post
• A package containing a bomb was delivered to her home.

In American English, a package is also a paper or plastic container that food etc is sold in
• a package of cookies

In British English, a packet is a box, bag, or some other container that things are sold in
• a packet of biscuits • a packet of crisps.

A packet can also sometimes be called a pack
• a pack of cigarettes.
This meaning of pack is also used in American English.

In American English, a packet is a small flat paper or plastic container for something such as tomato ketchup or sugar. The British word for this is sachet.

Packaging is material that is put round things that are sold, to protect them or to encourage people to buy them
• It's the same old stuff in better packaging.

Packing is material that is put around things to protect them, especially from getting damaged in the post
• Carefully remove the computer from its foam packing.

(American usages are in bold)

Not the answer you're looking for? Browse other questions tagged word-request american-english .

0
Is this a "packet" or "package of rice crackers" in British/American English?