How to describe the following greeting gestures?

"Clasping hands" would fit all the 4 hand gestures but I want to differentiate between the four. I'm especially interested in how to describe the first picture.

The context where I want to use this hand gesture is as follows:

We greeted each other in the Akha manner—clasping each other’s hands and scrunching up our eyes.

(The Akha are an indigenous hill tribe that live in small villages at high altitudes in the mountains of Thailand, Burma, Laos, China, and Yunnan Province in China.) 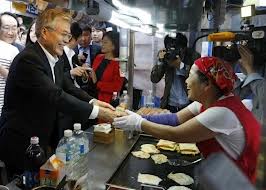 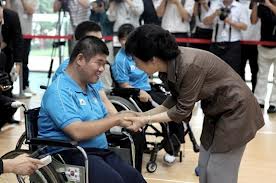 The first one looks like a team hand stack (warning: black hole ahem, sorry, TV Tropes link). It usually involves more than two people, though. (Perhaps that gets hard to photograph?)

The third looks like both people are doing a double-hander - see the description a bit past halfway down that page. Alternatively, I've seen this called the glove handshake. This type of handshake is a stereotypical favorite of politicians.

I'm not coming up with a name for the fourth. It looks kind of like a variant of the double-handed handshake (see above), just more sincere. If I had to describe the scene, I'd probably use some variant of "clasp":

She clasped both of his hands between hers and gave him a warm smile.

Edit: Since you asked especially about the first picture...

Like I commented, the first picture does not read "greeting" to me, nor —I dare say— to anyone else in the Western world. Thus, if you wanted to talk about a greeting that involves stacking hands like this, you would have to describe it.

We greeted each other in the Akha manner, clasping all four of our hands in an alternating stack and scrunching up our eyes.

We greeted each other in the Akha manner, piling our hands on top of each others' as if we were starting a team hand stack, and scrunching up our eyes.

Naturally, once you've defined/described the greeting, you could refer to it as an "Akha handshake" in the rest of your narrative.

I think the words you used, "clasping each other’s hands" is the perfect choice. It is more expressive than a handshake.

Not the answer you're looking for? Browse other questions tagged word-request phrase-request greetings .