the meaning of "to be out" in the context

I might disagree with a lot of his politics but Jeremy Corbyn was out today bucket shaking for the refugee crisis.

To tell the truth I am a little bit puzzled by the above clause. Does "was out" in the second part of the clause mean a positive statement? Only if it is so the sentence makes sense for me. The author in that case says that despite the fact that she is not a supporter of JC, his today activity in favour of refugees she found praiseworthy. But on the second hand I have not been able to find that "to be out" can have the positive meaning. When the meaning of "to be out" means in the sentence literally that Corbyn's activity was an act of the political incompetence, I do not understand why there is conjunction "but" used there. So how does a native speaker understand that sentence?

To answer your broader question on whether it is positive or negative, without reading the sentence deeply, I see that the author says that they "disagree with . . . his politics but _________." So whatever goes in the blank there will be something positive in the author's view, as it negates his disagreement. In other words, it is something that the author DOESN'T disagree with.

As for the "was out today," I understand this to mean that he was "out in the field" doing something. Let me clarify this, as the specific meaning depends on on who the subject is. If this were about a friend from school, then "was out today" brings images of being out around the campus, physically doing something (in this case, collecting money directly for the refugee crisis).

If the subject is a bigger figure, like a politician, they may not be physically out in the streets collecting money, but more out on the floor of the senate arguing for money to be allotted for the refugee crisis.

Either way, it is a positive thing that the author agrees with.

Out here is the ordinary locative, as in "The doctor is out today" (meaning literally that the doctor is not in his office today) "The secret is out" (meaning figuratively that it is no longer a secret, it's "out" in public).

It's used here to indicate that Mr. Corbyn wasn't lurking at home or closeted with advisors but publicly busy "shaking the bucket".

was out today bucket shaking:

left his figurative castle, where he normally spends his time protected from harsh realities, in order to collect money under the aegis of (shake the bucket) for the refugees in the name of Christmas (when one's supposed to help the needy). 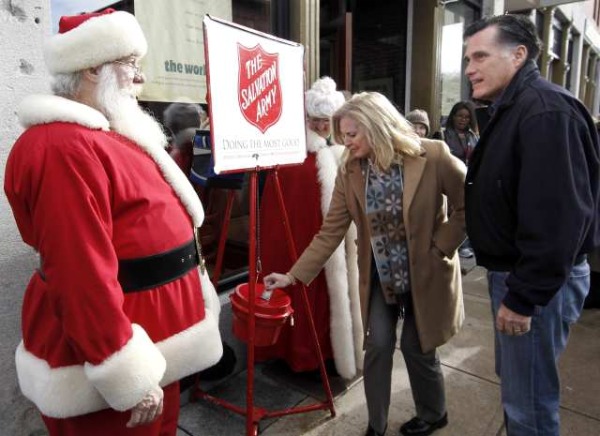 I think this is more simple than how you're trying to make it. The meaning of "was out" in this context seem to be quite literal although it may not have been literally what he was doing, meaning that he was out and about doing the action following. This sentence could also be said this way:

"... but Jeremy Corbyn was in the act of bucket shaking for the refugee crisis".

Similar use of the phrase would be:

"John and I were out getting sales today at work like crazy".

It's nearly literal. Here, "out" means outside. So "to be out" litterally means "to be outside". The implication is that the person is not at their usual place such as home or an office building. The form is:

is out [gerund phrase]

to go outside and [verb]

Anyways, this expression has neutral connotation. You could omit "out today" and put today at the end to get a sentence with the same basic meaning

Jeremy Corbyn was bucket shaking for the refugee crisis today

The only difference is the "not at home or office" nuance.