Is 'swim in the soup ' a common expression for English native-speakers?

When I was reading a book, I found this sentence:

Is this kind of an expression I have never heard of commonly used? If so,what does it mean?

First of all, I wouldn't call it a commonly-used idiom, although it would be hard to show that, because the phrase in the soup can be used in a lot of different ways (cooking being the most obvious). I did a Google search for "I am in the soup," and didn't find all that many hits. Moreover, even ones that looked promising didn't mean necessarily mean "in trouble"; for example:

the pilot again stated that he was "in the soup"

I thought that might mean that the pilot was in trouble, but, looking more closely at that webpage:

When interviewed later, the controller stated that he did not realize that "in the soup" meant "in the clouds."

Second, even though a dictionary can verify that in the soup can mean in trouble, I don't think that's what the author is conveying here. I believe the soup here is simply a metaphorical broth, and:

is about the same as:

as evidenced by the author's prior statement:

Children are not going to miss out on the glories of Facebook and YouTube because teachers failed to incorporate social media in their classrooms. The Internet is the soup that our students have been swimming in all their lives.

In other words, the Internet is all around them.

To be in the soup is an expression dating back to the early 1800's:

It means being in trouble or being in deep shit.

When I think of soup in a metaphor, I think of it in comparison to other liquids; that is, it is cloudy and generally filled with random stuff. The Merriam Webster definitions of the adjective 'soupy' include 'densely foggy or cloudy', seemingly in reference to weather. Thus, for something to be 'soup' in a metaphorical sense, it must be somehow foggy or cloudy.

In you example, the students are swimming in soup, or, based on this definition, they are surrounded by a foggy or cloudy substance. From this, I infer that the Internet is being described as a distraction, something that prevents students from seeing or properly interacting with the world around them, and they have been living in this way for their entire lives.

I think the use of 'swimming' is just part of an extended metaphor. The emphasis is on the Internet as a soupy fog, but the only way to be immersed in literal soup is to be swimming in it.

"in the soup" is an idiom which means:

What the author means is that the students nowadays are depending too much on Internet (google and social medias). The author sees Internet as a hindrance to students' development as it is evident from the next paragraph2: 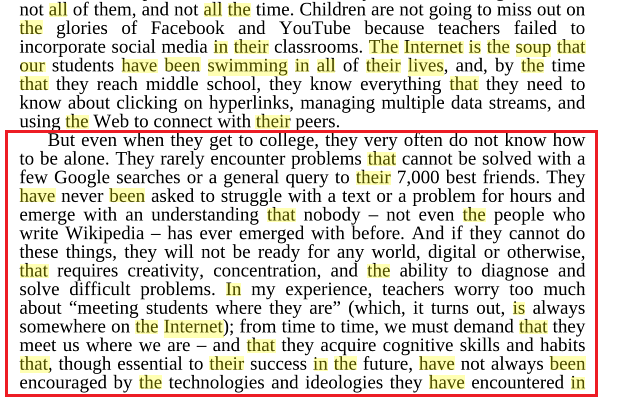 It's common among English-speaking flies, perhaps.

One dimension of this offhand comment is to reference an ancient series of "fly in the soup" jokes. For example:

It's a given that the fly is swimming, but what style of swimming?

Or in poorer taste, especially during a famine, or in a reputedly poor country

"Waiter, there's a fly in my soup!"
"Sssh, keep quiet or everyone will want one"

And others in similar vein, some sympathising with the plight of the fly rather than the customer.

I won't claim to know, but this might be the origin of "in the soup" for being in a sticky situation with poor chance of escape, such as a VFR-rated pilot,without instrument training, in cloud. Chilling though it is, it seems to be an actual training video. "In the soup" (0:44) is British understatement from the pilot, possibly not understood by people who hadn't heard the jokes.

So, the implicit question in the book is, how do our students learn to escape from the Internet or even see beyond it?

Not the answer you're looking for? Browse other questions tagged expressions .

1
"Here." or "Present."?
0
What do you think the expression "people who have gone" means?
41
What does "Nailed it" mean?
1
Could you help me understand what the expression "as a proportion of" means?
0
Is this a common scolding expression "Your night is dark, just wait for me till we back home."
1
Which is more common, “decide to do” or “decide on doing”?
0
Can't understand an expression
0
Does the expression "find it never enough to..." exist?
0
What does it mean "to give the huffle of something"?