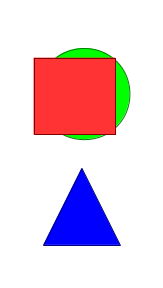 Suppose we have a flat drawing with rectangle, ellipse and triangle (see picture).

What prepositions can we use in these cases:

I understand meaning of these prepositions in 3D world. But in generic case of appearance of 2D painting on screen (say, at web-site), when I don't have any guess about user's devices and their disposition (e.g. he may use CRT monitor with vertical screen, or put his tablet horizontally on table, or lay on his back with keeping screen horizontally) — what is the best word choice? Or every word would be equally ambiguous without context knowledge?

So, question is not about prepositions themselves, but about their traditional usage for specifying disposition of 2D objects on screen — and their potential ambiguity for user with unknown screen orientation.

The following four positions are obvious

If a specific frame of reference is given, i.e. the upper-left hand-corner, then

They all mean the same thing

But if you take into consideration, dimensions of space, a 3D environment, then you may have different interpretations.

For instance.. Below the bed would mean at the bottom and not necessarily under the bed. Another example could be..

My dog sleeps below my bed.

This implies that the bed is simply taller than the dog. It doesn't explicitly mean that he is beneath/under/underneath the bed

I'm not sure why we have three words that literally mean the same exact thing, but there it is.

4
Looking behind or Looking backwards
3
"Fall under the keys" versus "fall behind the keys"
20
soft as <down underneath>: why not underneath only?
3
"Like the others" vs "Unlike others"
0
Underneath / Beneath for hidden things
0
(Higher/upper/above) and (below/under/lower) the sea level
0
"with others" repetition
0
(Behind), (behind them), (behind their back)
0
well under way/fully under way
1
(image) under the text or below the text?