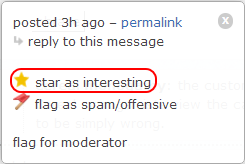 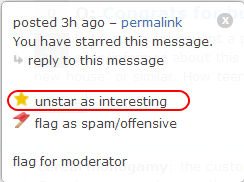 These are normal common messages most of us who've chatted in SE chat interfaces have seen. I find the way the negation prefix un- "acts" intriguing.

I'm more interested in the grammatical explanation behind the acceptability of the sentence "unstar as interesting" and how it could possibly mean, if it does, "to remove the star from a message previously starred due to being interesting". Please don't deviate much into the meaning nuances and/or possible replacements.

To answer your questions:

Because in this particular case, the trait of "interesting" is being used as a quality that can be given and taken from an otherwise neutral state. A message without a star isn't necessarily uninteresting, it's just not interesting enough to warrant a star.

The prefix negates the word "star" as a verb, making the action negative. Thus, you un-attribute a star, whose significance is to denote interest.

Implied: That isn't intuitive at all! Are you sure that's what it means?

In all honesty, I can't rule out the possibility of the wording being a glitch in the software.

As interesting doesn't describe the activity of starring, but it's describing an implied "this."

Unstar this as interesting

but this is elided because it's already in a previous sentence. It's assumed that the object can be understood from context. This is fine and happens all the time in conversations. This text was written conversationally to be friendly.

Un- means to reverse an action, or take an action that negates a previous action or effect. You can't undo something that wasn't done in the first place.

Not the answer you're looking for? Browse other questions tagged negation as prefixes .

1
Would you help me with prefixes?
6
agreement with so and neither
1
either with be and ing
1
The story may not be interesting; the story may be not interesting
2
Why instability and not unstability?
0
What's wrong with these two sentences?
2
Is this a special/peculiar use of "as interesting as"?
0
What's the difference between sentence with "though" and without?
13
Can I safely use "not" instead of words with negative prefixes?