What is the English word for a “map indicator"? 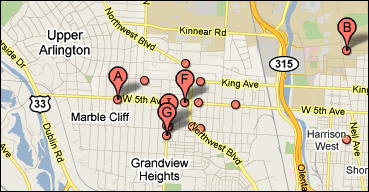 What is the English word for the red markers with a letter on them? Google itself seem to use, well, marker, but I wonder if that’s too technology-related (like, say, pointer?).

I need a word that applies to red markers on the map above, but also to the real world object, like this: in other words, something with a pin that is literally placed on a map to indicate a point.

Thought about pin itself, pinpoint, but I am not sure about which is the best.

Google themselves use pin to select a location: dropped pin

The red bubbles are location indicators or location tags acting as locators to mark geographic points.

Locator is possibly the single word you're looking for to call the red bubbles.

Each locator on the map points to a location of interest.

To my mind, the best word choice would be just ''balloon mark" or "balloon pointer".

It would be simple and uncomplicated and would be easy to say also.

Officially, it's the 'Google Maps pin', that

"teardrop-shaped marker icon including a shadow"

which is part of its description found in the patent for the very thing you ask about. See Wikipedia on the Google Maps pin.

I note that the article says

The Google Maps pin has been called "a product of pure function that has evolved into a cultural phenomenon,"

which assuages my predilection for referring more to its function than its name. At least now I know what to call it, as before I was thinking just to say 'red bubble thingy' or 'red balloony thingy'.

Thus if pressed, I can call it a pin, map pin or pushpin:

a thumbtack with a spherical or cylindrical head of colored plastic, used to fasten papers to a bulletin board or to indicate positions on charts and maps

It's a more generic term than map pin (which I wouldn't use) and more pleasing than any such overlong term as location indicator, position locator, etc.

I think the phrase indicating balloon is okay because the indicator is very much like a balloon (balloon shaped).

Not the answer you're looking for? Browse other questions tagged word-choice word-request .

19
A word for "getting colored"?
2
Verbs for describing the action of defecating

4
What's the English word for something that given attention too much to
1
The use of the word "to realize"
2
What word means "to be an indicator of"?
4
What would be the equivalent of "Grundlagen" from German in a scientific paper?
0
Courses that fit in my ... study plan/ curriculum?
0
Does the word "engineerical" exist?
3
What is the English word for Indonesian word "gemas"?
4
Word for someone who doesn't know any latest trends?
0
He/she is a real human
0
Back-to-back but less colloquial