Is “sing” a noun or a verb in this quote by Samuel Beckett?

"When you are up to your neck in shit, all you can do is sing."
Samuel Beckett 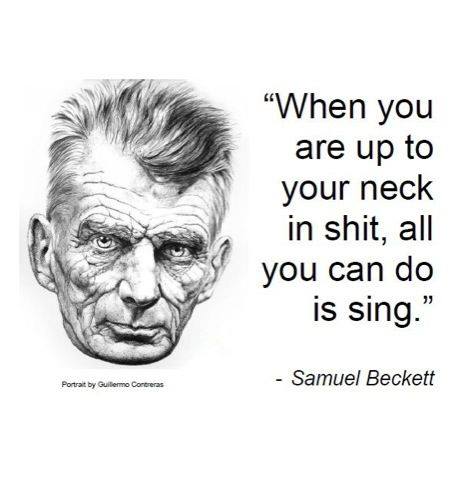 I just checked some credible online dictionaries like Longman, Macmillan and American Heritage and they all had "sing" as a verb only. Though there was an entry as a noun in the latter, obviously it wasn't relevant to the context here.

On the other hand, I checked and saw the infinitive form of "sing" as "to sing" so I'm confused and very curious to find the grammatical point behind this usage.

Plus I'd like to know how it would be if we replaced "sing" with "struggle" here. Can both "noun" and "verb" forms of a given verb be used here after "is"?

In A Practical English Grammar by A. J. Thomson & A. V. Martinet (the section on bare infinitives, section 246K) the authors claim:

K. The to is optional in sentences such as: The only thing to do/we can do is (to) write to him or

This fits in with my understanding, but the 'to' sounds a lot less idiomatic with some verbs than with others. There is probably also a trend towards favouring the bare infinitive.

It’s a verb. When the sentence is:

then the blank will be filled in with a verb, and it’s tied back to the word do, because it will say what we will be doing. For example:

All we could do was laugh.

The only thing they could do was clap.

(laugh and clap function as verbs)

Without the “do”, we would use an infinitive. For example:

We needed to stop.

They had to eat.

All you can do is sing.

Sing is a bare infinitive used as a complement. The sentence could look like

The words you can being redundant are left out.

If you use struggle instead of sing, it will also be a bare infinitive.

I believe that Samuel Beckett, being from Ireland, is using the word 'sing' here, in a sense different from 'uttering melodious sounds', as has been assumed in this thread. Surely, this is simply intended humour.

In various parts of England and Ireland this word 'sing' can also mean to have a very strong smell, as in, 'That pile of manure really sings!' Other words with a similar meaning are, 'reek', 'stink'. 'pong', 'hum', 'smell', etc. All of these, with the exception of 'sing', may be found in the on-line English Oxford Living Dictionary at https://en.oxforddictionaries.com/thesaurus/. 'Hum' (described as British Informal) is the closest, but 'Sing' is used to be more emphatic. I have heard both of these expressions used frequently in Buckinghamshire and Hertfordshire in England.

So in the same way, one could say that in the circumstances of the quote in question, 'all you can do is smell'. If what I believe is right, then it is clear that he did intend to use the words, 'all you can do ...', because you couldn't help but smell/stink/pong/hum/sing, could you?

Not the answer you're looking for? Browse other questions tagged infinitives quotations or ask your own question.