what does this 'sweeping round' mean?

In chapter 3 of Moby-Dick:

The opposite wall of this entry was hung all over with a heathenish array of monstrous clubs and spears. ... one was sickle-shaped, with a vast handle sweeping round like the segments made in the new-mown grass by a long-armed mower.

Does it mean that the handle can be used to sweep the weapon like that?

Like much of Meville, this is not an easy passage to read due to the ambiguity in punctuation and length. In his description of The Spouter-Inn, Melville describes several of the implements used in whale craft at the time hung on a wall.

One such implement Melville describes as being

sickle-shaped
having a crescent shaped blade

with a vast handle sweeping round
with a large, extensive handle all around
sweeping -> extensive
round -> around

by a long-armed mower
by a scythe

Such an tool would have probably been used to cut the blubber of a whale. 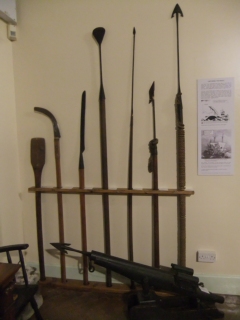 "Sweeping round" describes the shape of the club's handle. The form of the club is visually sweeping around in a circular fashion, the way hay falls when cut by a mower. But there is no person in the sentence actually performing this action.