Is "a bit more erected" an appropriate way of describing the following posture?

I want to explain why the bunny on the right-hand side of the following picture appears to be bigger than the one on the left. Maybe it is really because of the difference in the heights of the two, but let's assume it is just because of their postures.

The bunny on the right-hand side appears to be bigger because it is a bit more erected than the left one.

How does this sound? Do you know some better expression? 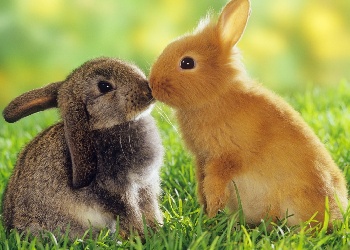 This is a great question! "To stand erect" means to stand straight and tall; I'm not sure there's a comparable for that definition of the word. I don't think you can say one person stands more erect than another; you're either standing erect or you're not. The dictionary definition seems to support that:

The bunny on the right-hand side appears to be bigger because it is standing erect, while the one on the left is not.

There is little room for misinterpretation in your sentence, and "to stand erect" is a perfectly grammatical and correct phrase. It is worth noting, however, the second definition of erect:

2. raised or directed upward: a dog with ears erect.

The word erect has a sexual connotation when used in this manner, so you may wish to keep this in mind (depending on your audience).

"Erected" sounds odd, yes. And a lot of people will make annoying comments about innuendo they spot in that.

Instead, a better phrase would be "sitting straighter".

The bunny on the right-hand side appears to be bigger because it is sitting straighter than the left one.

When used with sitting, standing, and so forth, "straight" implies not just geometric straightness, but also maximizing that dimension. So "stand [up] straight!" is a way to tell someone to stand as tall as possible.

Erected = built: "It was erected in the 17th century". There erected is the past participle.

Erect = standing straight, or sitting with one's back straight.

The bunny on the right is standing erect.

Other than the sexual connotations, the "more" doesn't sound good, and "erected" would sound great for a monument, not for a bunny. Well, "because it is holding its head higher" is a first idea about posture that doesn't mention "posture". Another might be "sitting but more alert". I was going to say "trying to kiss the other bunny", but that takes us back to the beginning :)

1
Can "prefer" be used in this case?
1
Do I need "one" in the following case?
7
Wiggle vs. jiggle
1
He was injured in the accident vs he was injured at the accident
4
Which word ('pampered' or 'spoonfed') is more appropriate in the following context?
2
Why is “I have learnt English since 2 years” incorrect?
0
"Take for vaccination" vs "take to get vaccinated"
0
"commonly used" vs "sound natural" and "is idiomatic"