To make chicken as food countable

They say chicken as food is non-count in English. In my native language, we simply count chicken as food. We go to a grocery store and ask for ONE, TWO, THREE frozen chickenS.

How do you count chicken as a whole (i.e. not having cut into pieces but without a head and feathers)?

Are these sentences right? If not, what's the right way to say them?

I roasted the three chickens for dinner.

I put all three roast chickens on the table and said, 'enjoy'.

I can say that, if I cooked this: 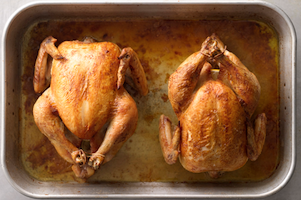 However, if I cooked different parts of chicken, I would treat the word chicken as an uncountable noun:

I would say that, if I had cooked something like this: 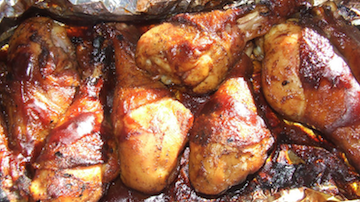 Interestingly enough, the uncountable expression works in either case. In other words, even if I cooked the two chickens in that top picture, I could still say:

Yes, those are all fine (though "raw fat chickens" sounds odd, but I'm not sure why. I think we'd probably say "uncooked" rather than "raw").

As you've worked out, if you are referring to whole cooked or uncooked chickens, and especially if you are counting them, you can treat them as a count noun. Even if there's only one, you can say "I served a roast chicken".

But if the wholeness and the number of them doesn't matter to you, you can treat it as a count noun "I bought some chicken"; "I served roast chicken".

There is not a difference in the circumstances you are describing, simply whether at that moment you are choosing to talk about the chickens as discrete objects, or as a manifestation of chicken meat.

Not the answer you're looking for? Browse other questions tagged grammar food .

4
Outdated food vs. expired food
24
Difference between "fast food" and "junk food"
5
Single clear word for 'hot food'
1
A way of saying debased food?
11
Articles with food
1
Nourishment vs food
1
What's the difference between convenience food, ready-made food and ready food?
0
Difference between “food” and rice
7
Besides "Chicken TV" does this type of food have any other names?