Should I say “There are (a) very few animals there” with an article or not?

When I'm saying the sentence

"There are (a) very few animals there"

should I add it an article (after the word "are") or not?

If people expect that there are a large number of animals there, and you know that there are some animals, although not very many, then you could say:

There are a very few animals there.

However, if you want to stress not the fact that the animals are there, but that there are not many, then you should say:

The phrase a very few is relatively rare, but it is perfectly fine, and very effective if you use it correctly.

Few and a few look similar and they both give the impression that we are talking about a small number of items. However, they are very different, and getting them mixed up can cause serious problems. For example, using the wrong one can make your sentence false.

The word few means not many. This is its literal meaning. It also implies—gives us the idea—that we are talking about a number greater than two. However, this is just an idea that it gives us. It is not part of the literal meaning of the word. If I have a hundred criminals in a prison and I say:

Now I can modify this word few with an adverb like relatively or very. If I say:

Then I am lowering the upper limit on the number of escapees. Say we agree that eight or nine escapees is not a large number, but ten is (considering there are only a hundred criminals altogether). If I think nine criminals will escape, I can say few criminals .... But if I say very few, the listener will think that there are less than nine, maybe four, for example.

A few is a positive word, with a positive meaning, and which has the syntax we expect from words in positive clauses. The word a few means more than two. It strongly implies—gives us the idea— that the number of things is not very large. But this is just an idea it gives us. It is not part of its literal meaning.

If I am inspecting a prison which has a hundred criminals, and I can see that there are some problems with the security, I might say:

Now, I can modify the word few inside the phrase a few, using the words very, good or fair. If someone denies that any criminals will escape, then I could say:

Now, here the word very is lowering our expectation of the upper end of the range of possible escapees. I am still guaranteeing more than two, but I am lowering the expected upper limit on the number of escapees. But notice that this is only an implication. It is not a guarantee. If the person who said that no one will escape takes my bet, then if everybody escapes, they will still have to pay me ten pounds. (They might still say You were wrong about it only being a very few though—as they give me my ten pounds!)

Notice when we use the words good or fair we are increasing our understanding of the lower limit, not the upper limit. Unlike when we used the word very, this does indeed affect the truth conditions of the sentence. If I say:

Then if only three criminals escape, everyone will agree that I was wrong. My sentence turned out to be false.

We can show that a very few has a positive meaning, because it normally takes negative question tags. A positive tag will sound unusual and will have a special meaning:

We can show that a very few does not mean the same thing as very few. The phrase very few means not many or perhaps not many at all. If I say:

These both mean the same thing. This sentence guarantees that if we substitute the word animal for a more specific type of animal, the sentence is guaranteed to be true:

So the more general statement guarantees (or "entails") the truth of the more specific statement. You cannot not eat animals without also not eating monkeys.

However, if I say:

This means I am guaranteeing a positive number more than two. I have lowered your expectation of the higher number in the possible range. But I have guaranteed something and not denied it. In this case, I cannot substitute a more specific word for the noun animals. My general statement does not entail a more specific one. Just because it is true that A very few people here eat animals it does not mean that:

If you want to stress that there are some animals there and people think there aren't any, you could say:

If you want to do this but you also want to show that you only commit to the fact that there is a very small number, you can say:

However, if people are expecting that maybe there are quite a lot of animals, and you want to stress that there are not many, then you should probably say:

And if you think the number of animals is much, much smaller than people expect, then you can say:

It can be very important not to confuse a very few with very few!

Here is the entry from The Cambridge Grammar of the English Language by Huddleston & Pullum, 2002. Cambridge University Press: 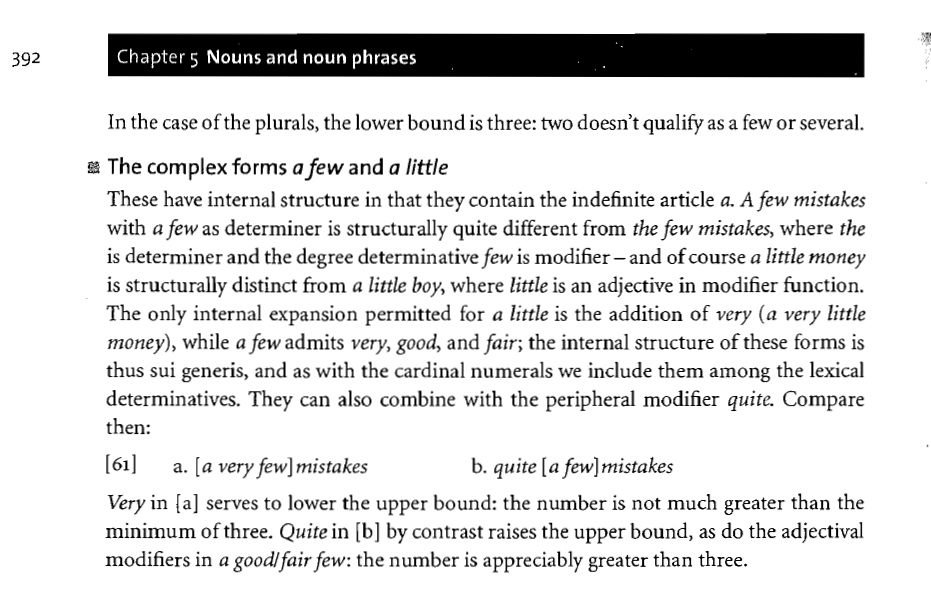 This question turned out to be tricky. I feel that in your example one should say:

There are very few animals there.

because the noun 'animals' is plural. If you delete the word "very", however, you can say:

There are a few animals there.

which will mean 'there are some animals there', or

There are few animals there.

which will mean 'there are not many animals there'.

"A few" and "quite a few" are set expressions meaning "some" and "many". The set expression "a few" seems not to admit the adverb of degree "very" in this particular context:

However, thanks to Maulik's comment, I looked and found examples of "a very few" in literature:

There are a very few rivers and brooks and waters in Weymouth. There are many apple-trees, and pear-trees, and vegetables, but a few plum-trees, and peach-trees and grape-vines in Weymounth. (From an essay composed by a deaf boy, 1820)

We can domesticate and/or train a very few animals to obey our commands in very limited ways, but “putting down” a dangerous animal is never punishment. (Richard Rowling, 2002)

To live within limits, to want one thing, or a very few things, very much and to love them dearly, cling to them, survey them from every angle, become one with them — that is what makes the poet, the artist, the human being. — Goethe (Troy Jollimore, Love's Vision, 2011)

In a very few minutes she reappeared, having scarcely allowed the two others time enough to get through a few short sentences in her praise, after Thorpe had procured Mrs. Allen's admiration of his gig; and then receiving her friend's parting good wishes, they both hurried downstairs. (Jane Austen)

I have now finished your book ('Das Bewegungsvermogen der Pflanzen.' Vienna, 1881.), and have understood the whole except a very few passages. (A letter by Charles Darwin)

There are a very few places where passages have been cut out of the diary, perhaps by HCS herself or by a descendant. (Hannah Callender Sansom et al., 2010)

So the issue is not as simple as it seemed to me at first. In some contexts, it's clearly okay to say "a very few". Maybe someone will explain the exact reason for this in a separate answer.

My answer is incomplete, and I'd like to scrap it, but I'll leave it for now because of all the literature quotations.

P.S. The Google Ngram for "There are a very few / There are very few" shows that the version with "a" has been much less common (kudos to FumbleFingers):

"So avoid using the word ‘very’ because it’s lazy. A man is not very tired, he is exhausted. Don’t use very sad, use morose. Language was invented for one reason, boys - to woo women - and, in that endeavor, laziness will not do. It also won’t do in your essays.”

Not the answer you're looking for? Browse other questions tagged articles adverbs quantifiers or ask your own question.

5
should there be a definite article before “eye level”? (a quote from Salinger)
4
There should be an article (A or The)
5
How should I write “(the) number of unique items { is / are } few”?
3
Are there other examples for the subdivision with definite articles
3
What article should I use with the word sarcasm?
6
Are there places where we can't use 'much', but 'very much' is OK?
0
Should I say “Are you student” or “Are you a student”?
1
Which article to use with 'are'?