I've heard someone, a native speaker, called his girl friend by "honeykins".

-kin is an English suffix that was used in the olden days to form diminutive forms of nouns. There are still several dozen words in the language that were formed using this suffix. The more known are pumpkin, catkin, napkin, the less known are ladykin, pannikin.

It has a curious etymology, let me quote from Wiktionary:

See - it's Germanic in origin: compare with German "Mädchen", "a girl". It is composed of the root "Magd"/"Maid", "female servant", and the diminutive suffix "-chen".

Another interesting bit, from "A History of British Surnames" by Richard McKinley, page 100: 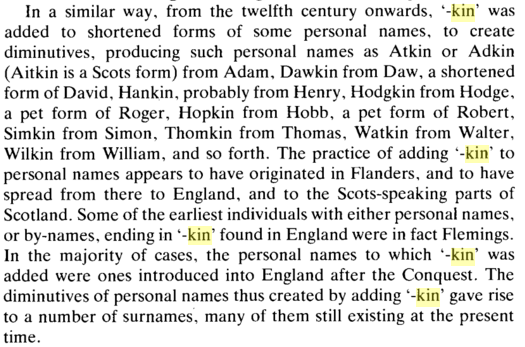 It turns out Richard Dawkins has this suffix too! Live and learn.

The linguistic term for a diminutive, endearing calling name is hypocorism (Wikipedia):

A hypocorism (/haɪˈpɒkərɪzəm/; from Greek ὑποκορίζεσθαι hypokorizesthai, "to use child-talk"), also known as a pet name or calling name, is a shorter or diminutive form of a word or given name, for example, when used in more intimate situations as a nickname or term of endearment. However, shortening of names is certainly not exclusive to terms of affection; indeed, in many cases, a shortened name can also be used to intimidate or humiliate. The ambiguity would need to be clarified by context.

According to Wiktionary, the suffix -s has 5 meanings, and one of them is hypocoristic:

It is considered to be a shortened form of the hypocoristic diminutive suffix -sy.

In the "Cambridge Grammar of the English Language" by Huddleston and Pullum, both "-kin" and "-s" are mentioned briefly in Unit 5.2.1 "Evaluative morphology: Diminutives":

The suffix -s also occurs after diminutive -ie in such playground words as onesies, twosies, widesies: it is doubtful whether it is here marking plural number. In addition it is found in various terms of address, such as ducks or Pops.

It is an alternative way of saying honey or darling.

The addition of kins makes honey sound even more loving. For instance, cutie and cutie pie function the same way.

In the Urdu language, we add the suffix "jaan" to convey a more lovable tone to a precious person.

It's one of the variations used for endearment - I believe there's no significant difference. (Preferences regarding words of endearment/pet name vary from person to person/couple to couple)

Not the answer you're looking for? Browse other questions tagged suffixes diminutive or ask your own question.

10
Under what circumstances does an adverb not get -ly?
4
What does it precisely mean that the suffix -ship “denotes a state of being”?
3
Does -wich suffix have a meaning?
2
What do you call an English lover?
1
What does the suffix '-fare' mean?
0
Does the morpheme “ative”, used as a suffix, transform the word into adjectives or nouns?
8
What does the same-ish mean?
1
What is the suffix of “feature”?