What is a single word for when “milk boils and flows out”?

When we boil milk and after a few minutes it flows out of the pan, what is the single word to describe this action or appearance? 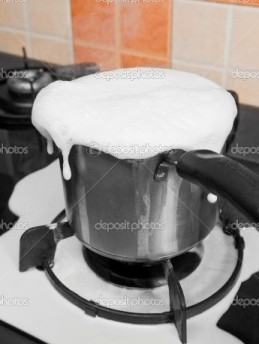 I'd call this boiling over:

If a ​liquid that is being ​heated ​boils over, it ​rises up and ​flows over the ​edge of the ​pan:

Take the ​milk off the ​heat before it ​boils over.

Imagine a horror movie. A bunch of bugs enters a person's ears and then the person falls to the ground dying, and the mouth frothing with bubbles.

Imagine another movie - a teenage comedy. The student mixes two liquids into a large beaker, and it starts to froth over. And then mayhem ensues.

Imagine Harry Potter movie, or better still, Once Upon a Time TV series. The green witch Zelena (Rebecca Mader), throws in a bunch of stuffs into her cauldron and stirs the concoction. Then it bubbles and froths over.

Usually when you boil milk, rice or oat, they tend to froth - form bubbles which overflows.