Why “short of a six pack” means someone is stupid or missing common sense?

I looked up in the urbandictionary

One Short of A Six Pack

A term used to describe a person who is not all there. A person missing a marble or two - a few percentages off from being full blown retarded.

adj. stupid or crazy; not "all there." oh man, look at this two cans short of a six pack

But I don't know how the means(missing common sense or stupid) comes froms short of a six pack. So could anyone please give me some hints about that?

In this usage, short means:

5a : not coming up to a measure or requirement : insufficient in short supply
b : not reaching far enough the throw to first was short
c : enduring privation
d : insufficiently supplied short of cash, short on brains
source:Merriam-Webster

Sense D is the most exact match; the idea is that a "normal person" has enough sense or capability to achieve a standard measurement (represented by some arbitrary item, in this case a package of beverage containers that normally has 6 units), but the person being talked about does not have enough sense or capability to achieve that same measurement.

The expression, then, equates intelligence to beer: you need 6 units (cans) to be normal, but the person being discussed is "one short of a six-pack": they have only 5 units of intelligence, not the 6 expected.

You can substitute "sanity" for intelligence in the comparison below:

He's not playing with a full deck of cards...

Here is a full six-pack: 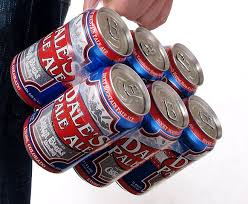 To be "short" something means that something is missing.

There are several idioms that use common occurrences to relate to common sense. For example:

A lack of common sense can be expressed as:

All of the above make the items useless or less than useful. Similar to a person who lacks common sense.

I think everybody is overthinking this expression. It is reasonable to think “something missing from a whole” (e.g. intelligence, etc...); but if you don’t think it that much it can easily be interpreted as being almost drunk and acting as such. Pretty much with a six pack of beers drunk at a somewhat fast rate, drunkenness will occur and you will behave accordingly. By saying “you are two cans short of a six pack” means you are acting weirdly almost to the point as behaving as being drunk.

Not the answer you're looking for? Browse other questions tagged slang or ask your own question.