What does it mean "a fork stuck in the road"?

Another turning point, a fork stuck in the road

It's been baffling me for more than ten years, first I thought maybe I was so not good at English to figure out its meaning, and now I've finished my masters degree taught in English and I find myself still not able to understand it.

Why there's a fork stuck in the road? is it some metaphor?
I know a fork can also mean

the point where something, especially a road or (North American) river, divides into two parts.

Is that the right interpretation?

I've looked up the Urban Dictionary and found

Any exceptionally stupid or illiterate phrase found in a pop song.

It says the right phrase to use is "a fork in the road", and it also makes reference to the "Good Is Good" song to show it is just another mistake made by the songwriter.

"Hey, somebody should tell Alanis that every time you hear the rolling thunder, it means the lightning already missed you. And read her a definition of ironic."

It makes sense to me, but it got three times more down votes than up votes.

So what does it mean "a fork stuck in the road"?

"Stick your fork in it and see if it's done."

To stick a fork into something can have a negative meaning, along the lines of 'I don't like it, it's terrible, it's not good', or, per definition 2 of the link, 'To be completely destroyed or defeated'. Or as in The Urban Dictionary (TUD) entry 3 'Indicating a losing or lost cause'.

So, being music and song, when lines can have many meanings, it seems a play on words of both "a fork in the road" as a decision or "another turning point" and to just stick a fork in the road, because I think the situation (or my life) is terrible or even a lost cause, and/or it shows that my attitude toward the turning point in life, or all of life, is negative.

But, as always, poetry and song lyrics are open to multiple interpretations, some of which may be unintended or even unknown to the writer(s).

It's important to remember that an awful lot of modern music was written while people were under the influence of various substances that could well be illegal in various jurisdictions. It can't necessarily be taken literally.

To "stick" something somewhere just means to put it there. It's a regional colloquialism.

A "fork in the road" is a junction in the road where both options follow initially similar directions as you're already aware. 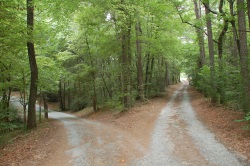 However this is a metaphorical fork in the road of life. It's a time in life when you have to make a decision. The implication is that this decision will have lasting effects, it's not something you can go back on.

Since the fork has been stuck there, it could be a forced decision that he didn't yet want to make. Taken in the context of the rest of the song, it looks like the decision to end a relationship.

Or he could just be high:

You understand the idiom correctly.  Surely you can see the potential for a joke.  Comedian Johnny Carson made this joke repeatedly in the 1970s and 1980s; see, for example, this video.  (Warning: it is slightly crude.)  You can tell that the audience has heard it so many times already that they say it along with him.

So this joke has been around for more than 30 years; I suspect that it predates Carson.  And, as long as there are seven-year-olds in the world, it will continue to be reinvented.  Here’s another recent depiction of it: 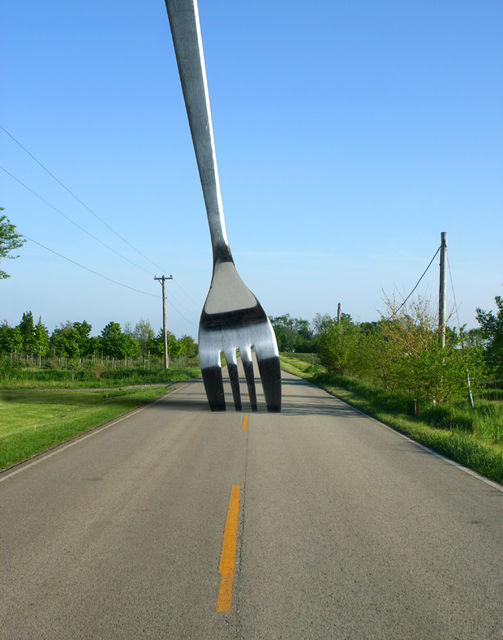 So, in short, the answer is that the song lyrics are just an old, childish joke, with some cultural history behind it.

The 'a fork stuck in the road' verse is a metaphor to indicate the juncture in our lives where the road we have been comfortably travelling on the journey of life abruptly splits in two different directions and the traveller is now forced to make a fateful decision on which of the two directions to take, not knowing where each of the two roads might take him. The fork's position on the road is that point where our road splits in two different directions and 'stuck' indicates that the fork cannot be undone, that this split on the road is outside of the person's ability to wish it away. He is thrown into the situation and has no choice but to consider the two directions suddenly laid out before him and it is a reluctant point in his journey. What is really stuck is the person in the situation who is stuck in that situation and has to try to make the most of it.

The songwriter wrote the song when his girlfriend of a few years decided to break up with him and move to South America and it had a big impact on him that he felt lost and didn't know how to handle the break-up or go back out into life again. Their break-up was a turning point for him as things would not be the same for him and he had the challenge of figuring out how to get over the break-up and where to go from that point.

For what it’s worth — without knowing the song in question [but probably informed somewhat by the comments of “Separatrix”] — I took it to be poetic, and I took it as follows.

A fork in the road is a point at which one has to make a decision — left or right, so to speak.

If the fork is “stuck in the road”, then that means that one cannot get away from this decision point. That could just mean that one is haunted by the effects of one’s decision, but that is not saying anything surprising… and the fork is behind. I took it, rather, to mean perhaps that the (forced) decision is ever-present. A relationship example could be if someone was thinking of getting a divorce, but had not (yet); the idea would there, nagging continually… and possibly there would be some reason why divorce was not possible.

Also there's the interpretation of 'stick a fork in it, we're done' which is one of the ways the you can test to see if food is done- you stick a fork in it (turkey's juices run clear, it's done. The fork slides easily in and out of boiled potato, it's done). Which is also a turning point. The cooking is done. Now it's time to begin the enjoyment of eating.