Differences between "cut", "cut off", and "cut out"

Choose cut, cut off or cut out for each figure.

I refered to the Macmillan dictionary for a full list of usages, and found this:

However I am still confused regarding the figures in question.

I suspect it should be:

Can someone give a better explanation?

The three definitions overlap substantially, but usage of the three differ by context.

Sentence 1 just means that a sharp tool was applied to the paper, causing one or more incisions. (E.g. a rectangular piece of paper can be cut into the shape of a star, an apple can be cut into quarters.) There is often an expectation that the cut starts from an external part of the original unless the phrase is expanded to cut out. You can say that the left and right figures were cut; a weaker case can be made for the middle figure.

Sentence 2 indicates the relationship between the shape and its 'parent' page. The word "out" gives the phrase "cut out" the notion that the shape was cut from the page's interior region. This closely matches the middle figure.

Sentence 3 stresses the break in connection between the corner and the page. "Cut off" normally refers to the removal of a protruding section. This matches the figure on the left best.

As you suspect, the second image has a circle "cut out." To "cut out" means "to remove a piece from inside of something using cutting." The grammatical object of the verb "cut out" is the piece that is removed.

The first one has the end "cut off" (which means "to remove a piece from an end or an edge of something using cutting"). So it seems to me that by elimination, the last one must be meant to represent "cut." The grammatical object of the verb "cut off" is the piece that is removed.

The most relevant definition I can see is 3:

In fact, "cut" can also be used to refer to a knife, pair of scissors or other sharp tool making a mark on anything (such as the rectangle in the figure), not just a part of the body, without separating it into more than two pieces. This distinguishes it from "cut off," which always implies separation (it's much less serious if I "cut my finger" than if I "cut off my finger"). The grammatical object of the verb in this sense is not a piece, but the entire original thing.

It's not just limited to body parts: if you do a Google search for "cut a piece of paper" you get images like the following: 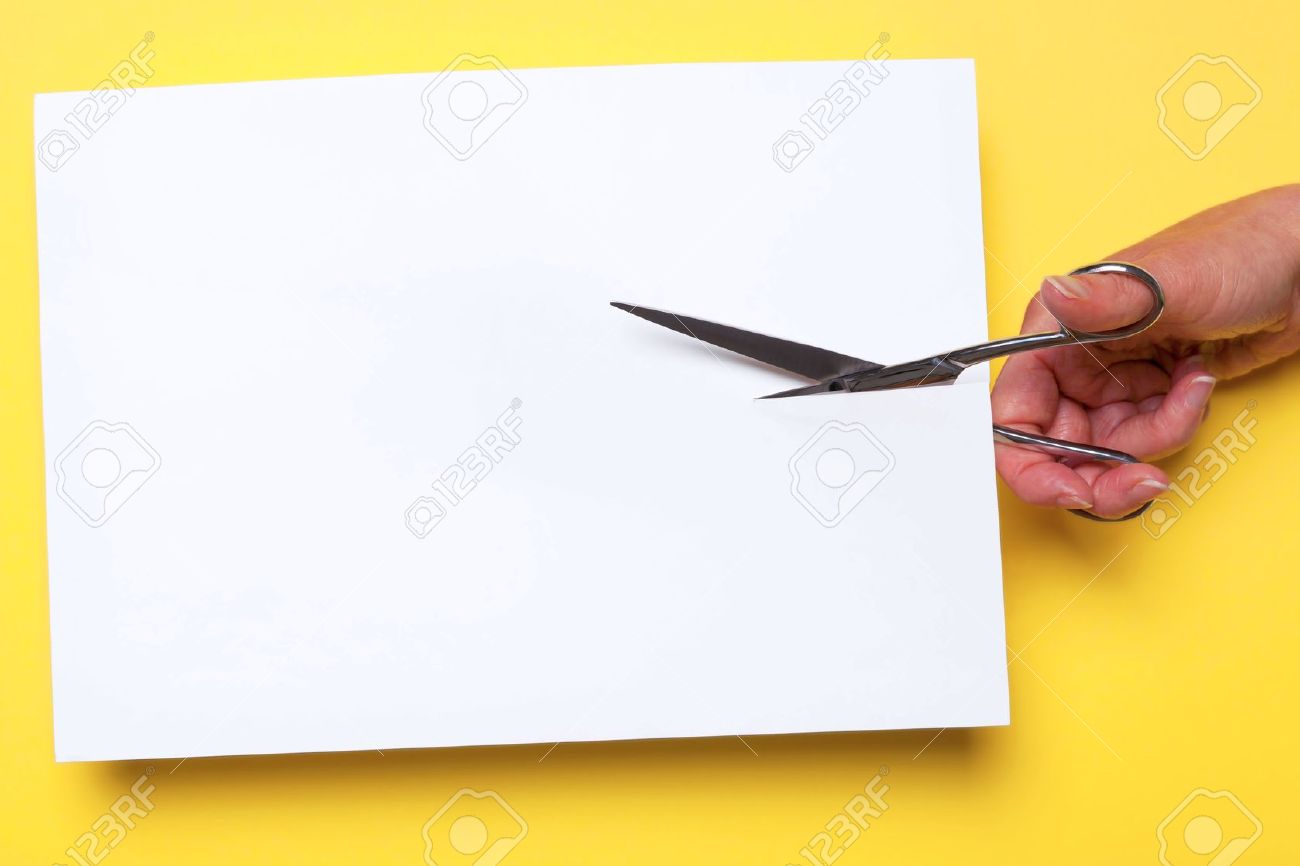 Therefore, we can say that the third figure is of a rectangle that has been cut. It's not a very good image, but the artist seems to be trying to depict the result of taking a pair of scissors and closing them partway around the rectangle.

0
What does “an inch or two off in the back” mean at a hair salon?