Can "immortal" be used to describe someone that lives forever, yet can be destroyed?

I am aware of the dictionary definition of the word "immortal": (source) 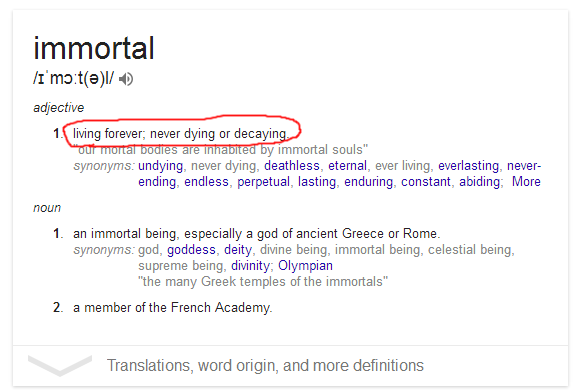 However, that does not directly imply "can't be destroyed", as far as I can see. My logic (which might be wrong!) tells me that someone might live forever by not aging or ever being sick, i.e. never die of natural cause but still, can be killed by unnatural causes.

This logic is supported by numerous mythology related films I've watched over the years, where gods of all kinds (and a God should be immortal, right?) are killed and destroyed, e.g. it's even mentioned in this question on a sister site on SE.

So my question is: can the word "immortal" in plain speech or writing, be used to describe something that still can be killed or destroyed? If not, how do you explain this inconsistency, language-wise?

Yes, and that's in fact what "immortal" mostly has meant.

The etymology of the word "immortal" reveals

The meaning of the word "dead" itself is

When we try to compare the meaning according to the definitions of related words, we deduce that you can't. However, irregardless of antonyms and synonyms, with regards to usage, a word might have a slight meaning difference to what is implied.

Many fictitious species are said to be immortal if they cannot die of old age, even though they can be killed through other means, such as injury. – Immortality in fiction, Wikipedia

The controversy lies in the fact that being killed also results in someone's death, but someone may die due to senescence, and "not by an external force".

Being killed has always been undesirable, but it has not mainly been what humans dreamed of avoiding. Escape from the inevitable death caused by old age, however, has been the subject of much of the fiction in human history. That there are many immortal Greek figures that are kill-able, but do not die of senescence, proves this.

When you want to talk about something fictitious, you decide what it means. So you can define immortality the way you want. So you may define your legendary creature as one that doesn't even die due to injuries etc. Or, you could take a look at nature.

The closest nature has to immortality is the doesn't-die-by-senescence version: Biological immortality has gained recent interest among researchers. See also a question about Immortal organisms on biology.SE.

Bottom line is, you can. The implied meaning has usually been very close to what you think. Vampires have sometimes been absolute im-mortals, sometimes beheading killed them, and sometimes silver bullets.

Let's take for example a being in the real world. 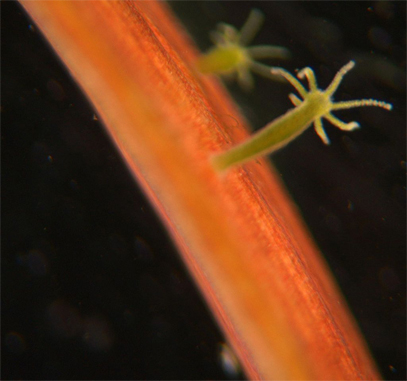 This is the Hydra. It belongs to the Cnidaria phylum and its cells are in constant renewal process, so that it can cure very fastly from injuries (Deadpool-much?) and to reproduce asexually. This also gives it the ability to renew its body time and again, making it biologically immortal. However, if a predator eats it or even if the injury is too serious for it to recompose, it can die, thus, not by natural means.

So I guess you can use immortal to talk about beings that can't naturally die, but yet can be destroyed by an enemy.

The basic meaning of immortal, by etymology and usage, is not subject to death.

But people decide how words are used and basic, etymological meanings can be transferred to new situations and pick up new meanings and usages.

The "dictionary definitions" (from the Oxford English Dictionary OED) of immortal include:

A. adjective:
1 a. Not mortal; not liable or subject to death; deathless, undying; living for ever.

2 a. In wider sense: Not liable to perish or decay; everlasting, imperishable, unfading, incorruptible.

b. special usage. Of fame, or of famous works or their authors: Lasting through an unlimited succession of ages; that will not fade from the memory of men; remembered or celebrated through all time.

1. An immortal being; one not subject to death. In plural, especially as a title for the gods of classical mythology.

I have included all but obsolete or repetitious information.

The OED, as good dictionaries do, describes usage; it does not prescribe usage.

I am not an avid follower of either vampires, zombies (not even those near Longbourn, Hertfordshire) or the like or of Greek and Roman gods. So I have to say, while acknowledging the basic meaning of immortal, people are free to use the word "as they like."

It is also the case that such usage merges into beliefs about death, the place of the dead, the so-called undead, life after death, the state or activity of the body and soul after death, and basically into metaphysics.

What the preternatural and the gods do, and what words are used to describe them, are up to speakers of the language. A god could, presumably, die (submit to death or 'undergo destruction') voluntarily–which is what Christianity teaches regarding the divine man Jesus the Christ.

Immortal = lives forever but can be killed. Invincible = cannot be killed. To me mortal holds the same meaning as immortal in the sense that it is something that can be killed, but defined by a lifespan, immortal being the opposite, by not having that lifespan. But this is Just my opinion / understanding and not as comprehensive as the main answer.

In Wil McCarthy's "Queendom of Sol" series, the term "immorbid" is used to describe people who cannot die from disease or old age, but can be killed.

I think you can't.

living or ​lasting for ​ever

So if a being can be killed, it is not everlasting, meaning that it is not immortal.

:not capable of dying : living forever

Likewise, if a being can be killed, it is capable of dying, and is not exempt from death. Hence it is not immortal.

Take a look at this etymology too. It too says immortal means "deathless". Similar explanation goes for this one too.

Not the answer you're looking for? Browse other questions tagged word-usage meaning-in-context .

-1
A word that means unable to die AND unable to be killed?

2
how to say someone that glass has been used
1
Can "that is " be used to explain multiple things
2
I'm an electrical engineer. How can I describe that in a CV?
2
Can I say "pink is fragile" to express that it symbolizes softness/something that can be destroyed easily?
1
Can 'that' be used instead of ' since' and 'as'?
1
What does "years of [someone]" mean and how can it be used?
1
Can the word "suspect" be applied to someone who hasn't committed a crime yet?
8
Can you describe someone as luxurious?
0
Can “hinder” be used when we describe something good?
0
can I use 'get' to say that a date hasn't passed yet?