I am really uneasy about this sentence.

The thing which makes me upset, is "a paper" in this sentence.

I had read in Wren & Martin long ago. A paper is wrong. A piece or sheet of paper is right, I think here the word "paper" is differently used. Maybe that's another thing. Well, we have also read in our previous classes that we cannot use indefinite articles with "uncountable nouns". Therefore, this thing does confuse me.

From the context, I take the paper as a piece of writing usually on an academic or official subject as in

They published a landmark paper in 1995.

Or it can refer to a piece of writing that is done for a course at a school. As in

He handed in a paper [=essay] about the nesting habits of birds.

The teacher was busy grading papers.

In either sense as you can infer from the examples, paper is a count noun.

Paper is noncount when it refers to the material that is used in the form of thin sheets for writing or printing on, wrapping things, etc as in

Be sure to print/write the letter on good paper.

As others have said, it depends on what is meant by "paper."

If the speaker means a sheet of paper (or a slip of paper, or a note written on a piece of blue paper), then you are right – it's not a very good sentence, and it's an awkward use of the indefinite article.

However, if the speaker means an academic paper (or a published paper, or a journal article), then the sentence is perfectly fine. The word paper is often used to describe publications of this sort, and the use of the indefinite article is spot on.

In other words, when it comes to

I wouldn't say that if I was handing someone the note on the left, but it would be a very ordinary thing to say if I was passing along the sheaf on the right. 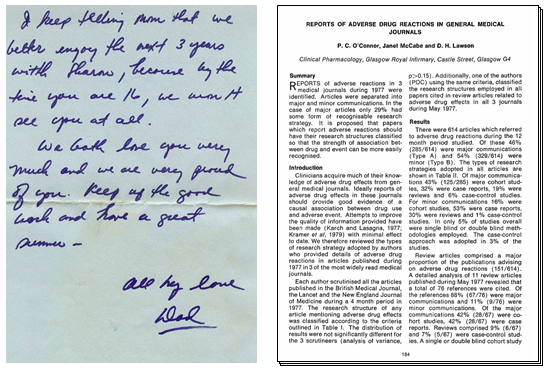 Context would drive the understanding of this sentence.

In an academic setting, this would be a normal thing to say, with the assumption that it was a "research paper" of some kind. This might be said about the exchange of such a paper from one professor to another.

A teacher might also say something like "I gave him a paper to grade"...perhaps giving an assistant a paper that was a student's homework or essay.

Without context, at one point in history it would have likely been normal to assume this meant "a newspaper". Although saying "a paper" (some newspaper from an unknown time) would be a less common occurrence than saying "I gave him the paper to read" (the current day's newspaper). This default interpretation is probably diminishing most places as people aren't getting their news from printed paper generally.

Here are a bunch of variations of the sentence.

I gave him some paper to read.

I gave him the paper to read.

I gave him the papers to read.

I gave him paper to read.

I gave him some papers to read.

I gave him papers to read.

These are all correct English sentences that have different meanings. Some of them are ... strange.

In (1), "a paper" refers to some document (academic or otherwise). Its specific identity is not the central point of the sentence, the act of giving is more central.

In (2), "some paper" refers to pieces of paper. It is strange, because when paper has writing on it, usually the writing is the important part; "some paper" has the connotation that the important part is the actual sheets. I'd expect nearby sentences to talk about how the paper would be written on (printers maybe?)

In (3), "the paper" could either refer to a newspaper, or some specific document. If a newspaper it would probably be a physical object; if a specific document, it could be on a computer or a file emailed. The document is specific, not general, as in "a paper"; either I'd expect the identity or description of this document from other nearby sentences, or it would be a sentence defining the importance of the document where the central point of the sentence is "the paper".

In (4), we are now talking about more than one document. They again are specific, and are either defined nearby, or this sentence puts them at the forefront and the important piece of information being conveyed in the sentence.

In (6), the added plural in paper means we go from sheets of paper, to many documents (or newspapers). This is the plural of (1); the papers are used interchangeably, we aren't talking about specific documents, but rather an undifferentiated sample of some population of documents.

(7) is a variation on (6) or (4). The papers feel less "anonymous" than (6), but less specific than (4). Contrast this with (5). The plural here prevents it from being about sheets of paper, forcing it to be about documents. The lack of some/the makes it both less specific and less non-specific at the same time.

In some regional dialects, passing the newspaper to someone would be "I gave him the papers to read", as a newspaper is a bunch of papers. In other dialects, that would be strange, but recognizable.

Speaking briefly, paper is both an uncountable and countable noun.

When used as an uncountabl noun, it refers to a material that you usually use to write, print, or draw on. Of course, there are also other uses such as it's used for packing, cleaning, or making things. A few examples are as follows:

This bag is made of paper.

Please give me a pen and some paper.

Wrap it in paper.

He put it down on paper.

Paper is a countable noun when it bears something written, printed, or drawn on it such as a paper (newspaper), an academic or official piece of writing on a particular subject. a set of questions or answers in an examination, etc.

The sentence is correct grammatically. Paper is often used as a short form of newspaper. Most probably, it means a newspaper in the sentence presented.

The sentence without the indefinite article 'an' will mean that you gave him a blank sheet of paper to read, which is quite funny. However, you can say 'You gave him the paperto read'.

Not the answer you're looking for? Browse other questions tagged difference articles uncountable-nouns .

1
I gave money to dad - do I need an article here?
2
What is the difference in meaning between "paper review" and "review of paper"?
4
So, the sentence "I read book" is wrong, isn't it?
3
Without (the / no article) air and water, living things could not survive
0
Say, pronounce or read?
0
"I gave it everything I've got" or "I gave everything I've got"
0
Are words read and refer same?
0
We’ve read or we read?