"A halved Pinang"; What is the equivalent expression in English?

"Like a halved Pinang" is an expression in my native language to compare the appearance of two persons who are alike/very similar/like a twin.

Note: Pinang (lat. Area catechu) is a species of palm which grows in much of the tropical Pacific, Asia, and parts of east Africa.

What is the equal English expression for Like a halved Pinang?

Note: Thanks for your responses. I should really be careful to use the expressions suggested that fit my native culture. For instance: 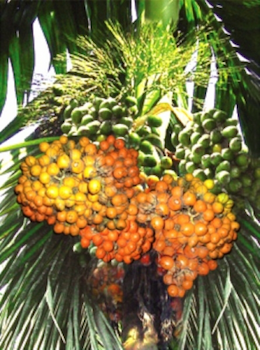 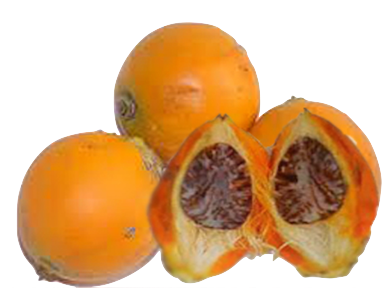 The phrase I would use is 'like two peas in a pod'. It's used in both British and American English, and keeps the plant theme.

I say a closer phrase would be that the two people are the spitting image of each other.

I've heard the word doppelganger used to describe an uncanny resemblance, but learners might want to be careful with that word.

As the Wikipedia page says, sometimes a doppleganger is considered to be an evil twin, or an ill omen. However, the article goes on to say:

The word doppelgänger is often used in a more general sense to describe any person who physically or behaviorally resembles another person.

Though I might be careful about using this word when talking with a stranger, I think it's worth mentioning for the sake of completeness.

There are many idioms that convey the same meaning as "Like a halved Pinang".

I'm guessing it means that the fruit, when cut into two pieces, looks exactly the same. Thereby highlighting the similarity between the two halves, which can be used metaphorically.

This is just one among many, but the only one that comes to mind right now:

cut from the same cloth.

Two pieces of cloth, that are cut from the same material will look exactly the same (provided they are cut identically). They will have the same features, like texture, which, again can be used metaphorically.

Read more about 'cut from the same cloth'.

Also, you could simply replace the fruit from your region, with a universal fruit, say, an Apple?

"Two halves of an Apple".

Make sure the fruit is symmetrical when cut. You could use Oranges, Mangoes also.

"Dead Ringer" implies more of an exact duplicate (or rendering) rather than two halves -- but it does seem to be often used to express that two people look like twins.

Urban Dictionary's example use of the phrase is, "Wow, that guy's a dead ringer for Elvis Presley, I thought he was back from the dead!"

I don't know but I suspect that it isn't very common in American English though. Also worth noting there was a British sitcom 'Spitting Image' in the 80s, famous for impersonating famous figures with puppets - probably where the show got it's name.

The first thing that comes to mind is "separated at birth" which as mentioned above is a variant of the metaphor in shin's "long-lost X" answer.

Someone who looks just like you is your look-alike. Warren Zevon - "Poisonous Look-alike.

Historically, it carried sinister undertones. In the U.S. at least, doppelganger is now used for any stranger who looks just like you. (An older brother is not your doppelganger, but could be your look-alike.)

Someone who looks just like someone else may be said to be the "spitting image" of that person. Especially common across generational divides. He is the spitting image of his grandfather.

To my understanding, the expression 'a halved pinang', in the Malay Language context actually means a couple that looks great together as they are both good-looking. We usually say this to newly married couples to celebrate and congratulate them. "Bagai pinang dibelah dua."

Hence, in this context I would say that the equivalent to the expression bagai pinang dibelah dua (A halved pinang) is a match made in heaven.

Perhaps in the future, we will speak figuratively of people as being "quantum entangled".

One can also speak generally of his/her/their "other half". I suppose it's the same phrase without the object of reference. However, it invokes a mutual dependence and partnership in life, rather than similar appearance.