dime magazines — what are those exactly?

Computers are all about input and output — the old I/O of days gone by, what the pioneers once sang about. The wimminfolk would want to dance real slow. Maybe cry. It was a sentimental thing, y’all — something that fancy, dooded-up city slickers read about in dime magazines.

What are those exactly?

The reference to dime magazine is somewhat obscure, but refers to inexpensive magazines of low-quality printing and lower-quality writing aimed at the mass market that were popular from the late 19th to the mid-20th century, nowadays more commonly known as pulp magazines, which printed pulp fiction. 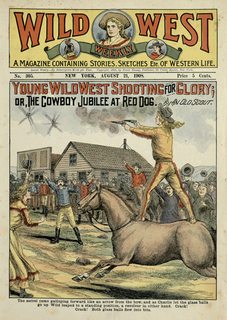 The author's reference to pioneers is a bizarre sidetrack referring to American pioneers, i.e. the 19th century migrants to the frontier, what are now the the Midwestern and Western United States. But he is not referring to the historical figures so much as certain tropes of the Old West and of rural people as you might have seen in Western films or television, hence the use of eye dialect and old-fashioned or rustic diction (e.g. wimminfolk rather than womenfolk rather than simply women). Dime magazine is part of this bad affectation, like dooded-up city slickers and y'all, as a term that the author imagines those pioneers would use.

The author is attempting to be funny, but to inject my personal opinion, he fails. This is needlessly silly on top of being ahistorical.

A dime magazine (like a dime novel, dime Western, dime museum, and so on) was originally just a magazine that sold for a dime, that is, 10¢ ($0.10), but later referred to magazines which printed serialized dime Westerns.

One of the oldest denominations of U.S. currency, the dime takes its name from a now-obsolete sense of dime meaning one-tenth, but being so old and physically distinct (as the smallest and thinnest coin), has found its way into a large number of figurative meanings and use in expressions from five-and-dime store to turn on a dime to not worth one thin dime. The terms dime novel, dime Western, and so on are no longer common, however, as the medium has essentially died out.

The dime Western was a genre of sensationalist stories of violent and untamed frontier life that originated with the 1860 Malaeska, The Indian Wife of the White Hunter by Ann Stephens. The cover price of only 10¢ was made possible by new materials, printing techniques, and distribution networks. As daily wages at the time were about $1/day, this was entertainment that was accessible even to unskilled workers. But because these novels were printed on cheap stock, were poorly regarded if at all by the literary world, and catered to lower-class tastes, the term dime Western or dime novel took on a pejorative sense as something low-brow and unintellectual. The earliest mention of the term in the Corpus of Historical American English is from the Atlantic Monthly in 1867, and the disdain is evident:

Who could preach a sermon that would hold attentive the man saturated with Buckle, Mill, Spencer, Thackeray, Emerson, Humboldt, and Agassiz, and [also] the man whose only literary recreation is the dime novel?

The OED, similarly attests to

Later in the 19th century, the primary format for the dime Western changed from short novel to serials, often titled libraries, which became the pulp magazine, and prices changed to suit.

But the negative association of dime persisted, and even though the magazines were priced from 5–25¢, the dime magazine as a concept remained. And lo, the Methodist Magazine and Review, Vol. 59 (1904) laments of The Pilgrim's Progress,

The sensation novel, the daily paper, the dime magazine, have crowded this better reading out.

The trans-Pond equivalent seems to have been the penny dreadful (as FumbleFingers noted in a comment), otherwise the penny awful, penny horrible, and shilling shocker.