What are these batteries called?

What are the small round flat batteries that you use in small devices such as watches, timers etc. called? Are they called the same in British and American English? 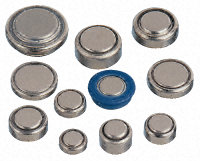 They are called Button Cells or Coin Batteries. They are widely used in watches, calculators etc, as you mentioned. Quoting Wikipedia,

"A watch battery or button cell is a small single cell battery shaped as a squat cylinder typically 5 to 25 mm in diameter and 1 to 6 mm high—like a button on a garment, hence the name. Button cells are used to power small portable electronics devices such as wrist watches, pocket calculators, artificial cardiac pacemakers, implantable cardiac defibrillators, and hearing aids. Thinner variants are usually called coin cells."

And as for the usage, these things are called as "Batteries" or "cells". And no matter where you say 'battery', everybody understands what it means. As far as 'cells' go, some people might not interpret its meaning as a portable power source, but as a biological term or a jail cell.

5
What are these things called?
1
Can we use "from", "to", "than" interchangeably in this structure "different (from/to/than somebody/something)"?
6
Why do people say "sports shoes" but not "sport shoes"?
0
Menacing or teasing people or... - What is such a person called in English?
0
Do we say "triangular hole" or "triangle hole"; "circle hole" or "round hole"?
2
What is it called: a card necklace?
0
What do you call the place where car tires are changed, oil is checked and if there is something wrong with your car, it is fixed?
7
Fruit is cut into smaller pieces like a chip and then boiled dried in sugar. Are they called "papaya/banana…chips" or "papaya/banana…jams"?
0
The use of "it" and "they"