Since all three can be used as nouns I was wondering if I can use them as someone's possession as in the three examples below.

I know fault can be used like that for sure. Now I have a slight doubt about guilt. Because, I know one can say. "They refuse to accept their guilt." Therefore, I believe guilt can be used as in my example. But, what about blame? I know one may say. "I'm not taking that blame." I'm assuming probably because it's not his/her blame, but, I don't I might be wrong. Hence, I need your help to figure this out. Any help will be appreciated. 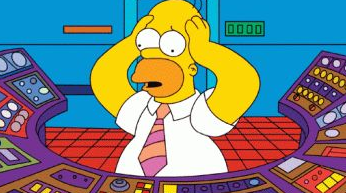 Somebody caused an accident at the power plant, and we want to hold the responsible parties accountable.

Whose fault is it?

That one works just fine; it's a normal way to ask the question. (A typical answer might be: It's Homer's fault.)

Whose blame is it?

This one doesn't work. We can talk about blame, but, syntactically, we don't use blame in the same way we use fault. Instead, we'd typically ask:

Who is to blame?

(A typical answer to that question could be: Homer is to blame.)

You can find a smattering of such questions on blogs around the web1, but it's not nearly as common as "Who is to blame?"

As far as guilt goes, it's similar to blame. Indeed, guilt can be used as a noun, but we don't generally say, "Whose guilt is it?" A more idiomatic way to ask might be:

Who is the guilty one?

but I think you'll find that "Who is to blame?" and "Who is at fault?" are far more common.

Although Adam blamed Bert for the accident, he did not feel any guilt because he knew that it was really Charlie's fault.

14
Correct plural usage for "hundreds" and "thousands"
6
Peoples say "request to" is wrong but I see a lot of sources have that kind of sentences
2
What Microsoft calls most commonly confused English words
1
Does "OK" sometimes make others feel impolite and disrespectful?
0
When you have a guilt (trip / complex)
0
How to choose among "ride a bus" "take a bus" and "be-verb on a bus"?
1
Can the adjective "assistant" + a job title (X) be used to mean X's assistant?
1
"Affect" / "Impact" / "Influence"
0
what is the meaning of "look and see" in this situation?