The aircraft can carry missiles

I have a question about the usage of the verb "carry" in this wikipedia article:

The aircraft can carry various other AAMs, a wide variety of air-to-ground missiles, rockets or bombs.

Two definitions of "carry" in this dictionary seem to work:

Definition 1 means to transport something from one place to another. Definition 3 means for a person to possess something so one can use it if need be.

Returning to the original context (F-16 jets). Definition 1 seems off. F-16s don't transport missiles and bombs from one place to another; the missile and bombs are meant to launched by the F-16 if need be. So, definitions 3 seems better. But definition 3 is meant to describe people, like:

and not to describe an aircraft:

The aircraft can carry missiles.

So, could the usage of "carry" in the wikipedia article wrong?

the dictionary definition seems to allow only people to carry something.

Worst of all, your dictionary link tells you that, if you just researched it a little bit more: 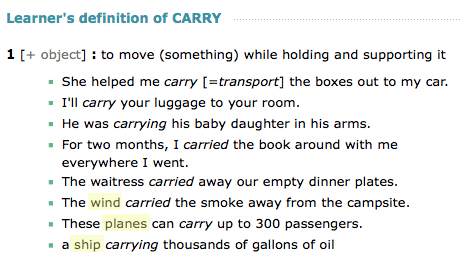 Definition 1 means to transport something from one place to another.

Hogwash again. Definition 1 means what is says, to move something while holding or supporting it. It doesn't matter if what's being moved or carried ultimately gets launched, jettisoned, eaten, burned up, or inserted into orbit, it's still being carried until it gets launched, deployed, or consumed.

Your assumption that def 3 applies to humans only is incorrect. Not only humans have body. Aircraft is also considered to have a body.

The sentence just means that this aircraft carries/holds those missiles, bombs in its body. And yes, these aircraft does not just transport missiles from one place to another, it launches them. Notice I used the word launches. This can be understood by a simple example.

Let us say we got a water balloon. We carry it to our friend's place and then throw it at him/her. The same way, the aircraft has got missiles. It carries it to the target location and then launches it.

I don't know what was in the dictionary-writer's mind when he wrote this definition. He might have been thinking that the word "body" can refer to the "body" of a vehicle or an animal as well as the body of a human being. Or he may have just been thinking of a human being carrying things. If the latter, then the definition is poorly worded.

We routinely talk about animals and vehicles "carrying" things. The word does not of itself distinguish whether you are simply transporting the thing from one place to another, or carrying it so that you can use it at any moment. "This car carries four people." Well, it's transporting them, but we probably include the driver as one of the four, and any of them could be engaging in all sorts of activities along the way. "The ship carries four dinghies." We may use them at any time as lifeboats or tenders. It's common to talk about vehicles "carrying" weapons or equipment.

Not the answer you're looking for? Browse other questions tagged word-usage word-meaning .

6
Does "vehicle" usually include airplanes, aircraft or spacecraft?
1
I am curious. Curious in copula construction. Ambiguity? Convention?
5
Can you "carry a child" in your womb?
1
What does "skip" mean when used to describe an aircraft?
0
the usage of the word "platform"
0
Carry a sentiment
1
Meaning of "carry over"?
1
Is “carry out” used correctly in this sentence?
0
What does "carry" and "through" mean in "carry through"?