Do we ever say, "In the English literature" ? Is it correct?

"Hamlet" is a classic play in the English literature.

"Hamlet" is a classic play in English literature.

"Literature" is a noncount abstract noun. When we use such nouns generically, to describe "literature in general", we usually don't use the definite article.

He is studying literature.

We also usually don't use the definite article if the noncount abstract noun is pre-modified (has a describing word before it):

He is studying English literature.

If the nouncount abstract noun is post-modified (especially by an of-phrase), we usually use the definite article:

He is studying the literature of England.

The same probably applies to the whole phrase "English literature": if it has a post-modifying phrase, we can use the definite article. I've found an example on Google Books:

... 'a moral force of great significance,' he showed, as often in his judgments of men, an insight which, at the same time, was prophetic; for Carlyle, unquestionably, was the strongest moral force in the English literature of the nineteenth century. Ward, Waller, 1909

In most cases though, especially if there's no post-modifying phrase, I believe the predominant form will be without the definite article:

Hamlet is one of the most famous works in English literature.

Let's use Ngram for a rough estimate:

However, we should remember that the word "literature" can mean different things. It can mean "a body of scientific publications", and in some contexts your example phrase can mean "the collection of scientific papers devoted to a particular issue and published in English". Here's an excerpt from "Multiple Sclerosis: The History of a Disease" by Dr. T. Jock Murray, MS: 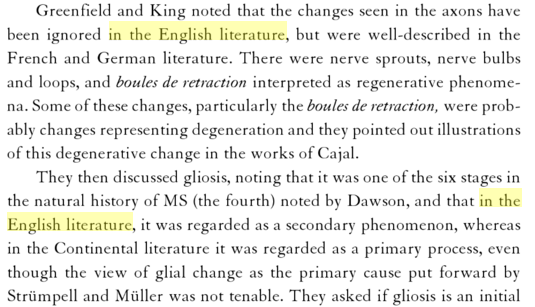 Here the author, being a native speaker of English, uses "the" in "in the English literature" even though the phrase is not post-modified. This usage also contribues to the red low-lying graph on the Ngram.

"Hamlet" is a classic play in English literature.

In this sentence, English literature is regarded as a genre rather than a specific body of text. You only use the for something specific, so you would not put the in front of it in this sentence.

By contrast, here are some specific usages of literature:

Here is an updated copy of the sales literature.

I can't find any information about this in the literature.

His specialist subject is the literature of India.

Not the answer you're looking for? Browse other questions tagged definite-article .